Influencer marketing on social media has taken off, and is now a ubiquitous marketing channel for any savvy digital marketer. But much like the rest of the internet, the choices seem endless.

The knee-jerk reaction tells us bigger is better, but is that really the case?There are a lot of things to look for in a social media influencer when choosing the best fit for your business.

There was a time when celebrities were the end-all be-all of high visibility campaigns. Pepsi was famous for including celebrities in their commercials - from Michael Jackson and Madonna, to the iconic television ad starring Britney Spears, Beyoncé, and P!nk as Pepsi-drinking gladiators.

But the rise of social media changed the game and analytics has made every aspect of a campaign measurable. Celebrities are no longer the only ones with vast fan bases, there are now social media personalities with similar clout like Daily Dose, Lele Pons, Kylie Jenner and Cameron Dallas. These social media influencer personalities command follower counts in the hundreds of thousands and into the millions. These factors have brought celebrity endorsement into the ranks of influencer marketing opportunities available to you, if you have the budget.

Brands approaching macro influencers pay big bucks to tap into the engaged, and trusting follower bases they command - and can see some incredible numbers in terms of engagement and visibility as a result. 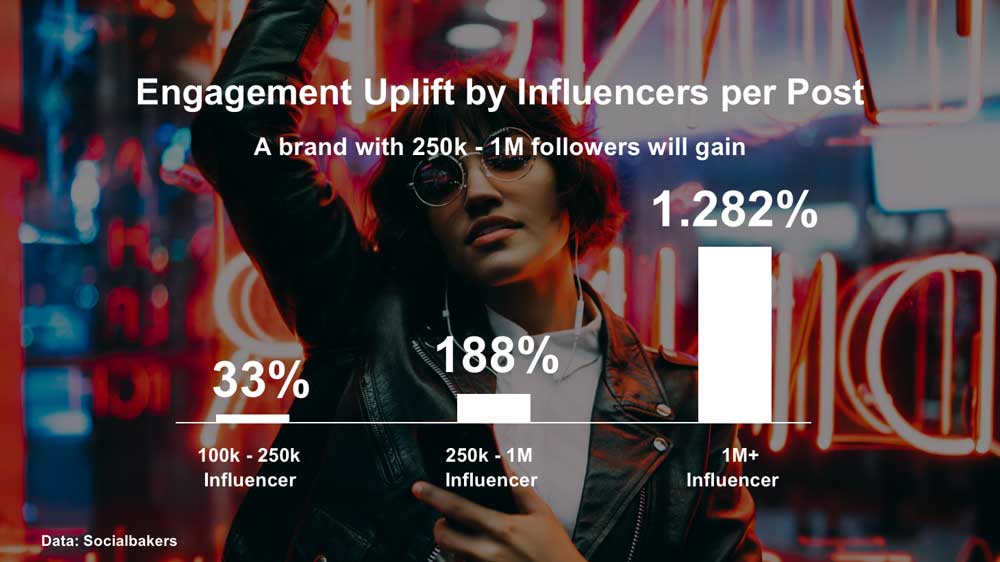 Some influencer marketing examples that really hit home are Subaru’s #MeetAnOwner campaign or fashion blogger Julie Sariñana’s collaboration with the fast fashion brand H&M. The key aspect of a good influencer campaign is that it should feel authentic - the influencer takes a brand’s message, and showcases it to their audience on their terms rather than acting as a mouthpiece for the brand.

Micro influencers are a bit of a different breed. Usually with followings from the thousands up to about a hundred thousand, these are the approachable side of influencer marketing. They’re people who might be your friends or neighbors. Some great micro influencer examples are Mary Orton (@maryorton), Marcos Soler Ferrer (@marcossoler), and Alex Aldeborgh (@daisybeet). Dogs can be micro influencers too, just ask Griffin and Haru (@griffinfrenchie), the adorable French Bulldog pair with over 111k followers who showcase sweaters, treats, and other pup products. 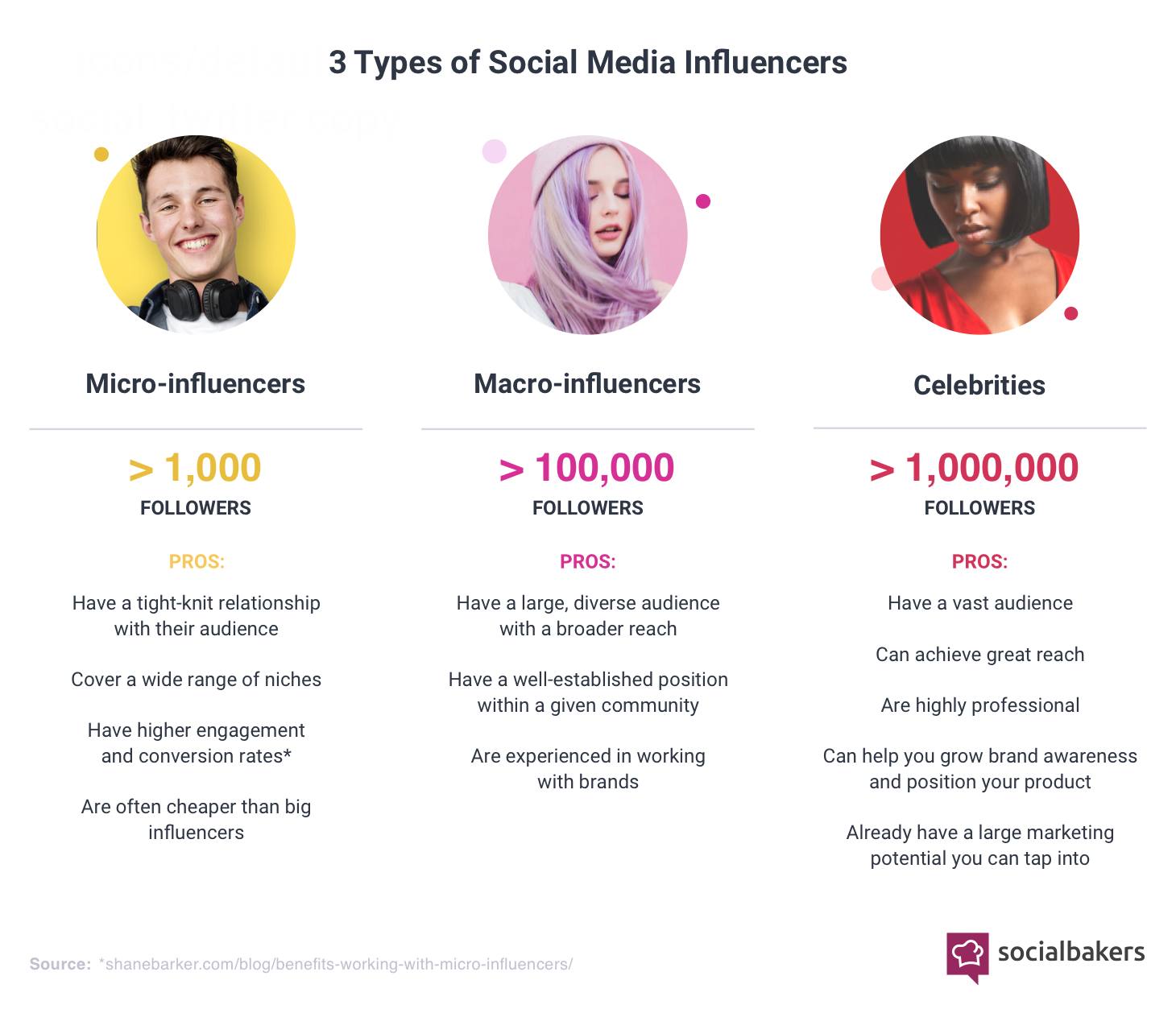 These social media influencers work more along the lines of word of mouth than the idolized authority large accounts boast. Whether it’s a fab new pair of yoga pants, that protein bar they’re snacking on, or the glass of rosé they’re enjoying on a hot summer day, micro influencers have a human face, and an individual story to tell. Because of this, it’s also even more important that you work on building a relationship with influencers you would like to work with. In this way, you can be on the same page about what you want them to promote and how - without trying to police their individual brand too much. Remember: don’t lose sight of the fact that you’re approaching them because of their individuality.

Don’t let the smaller numbers fool you, when it comes to audiences, the adage “it’s not the size, it’s what you do with it that counts” really holds true. Micro influencers prove this rule with impressive prowess. That authenticity and approachability really seems to pay off. What they lack in reach compared to their multi-million follower siblings they more than make up for in engagement.

And it’s not just engagement rate either, you can boost your ecommerce sales with influencer marketing, too. Micro influencers also have over a 20% higher conversion rate. This is not surprising, as consumers make most of their purchase decisions based on suggestions by close friends (86%), although distant friends (39%) and influencers (31%) also carry good clout in their decision-making. Meanwhile, brands and strangers ranked much lower- with only 23% of respondents saying that these influenced their purchase decisions.

Micro influencers are also much cheaper than their big name counterparts. You would be looking at spending a couple hundred USD per post, rather than a couple thousand. Combine that with their increased engagement and conversion rates, and micro influencers might just be more cost-effective for your business goals!

Therefore, if you’re really looking for engagement and conversion, don’t shy away from micro influencers. They’re an increasingly important aspect of social media influencer marketing and they boast some impressive advantages over big name alternatives. This is both true if you’re a smaller business and don’t want to blow your budget on one or two posts or a more agile big business. You can even pair up with multiple micro influencers for about the cost of a single collaboration with a macro influencer to mitigate some of the loss in reach you’ll encounter with the micro alternative.

Each influencer option has its pros and cons, so it’s important to find an influencer who’s brand and audience line up with your business goals.

With so many options, deciding which route is best for your business can seem impossible. But a good way to break it down is to think about what your business needs right now. Do you need visibility or conversions? Is reach important to you, or is your priority hooking in those sales?

If all you are looking for is reach, and you have the budget to pull it off - celebrities are the powerhouse accounts you want to get in touch with. If you’re looking for wide reach and engagement, but not necessarily a high conversion rate, macro influencers are here to help you out.

Meanwhile, micro influencers should be your go-to for conversion rate. They can convert customers cheaper and more efficiently than any of the other options, making them a powerful option to boost your ROI. They may even be more cost-efficient than your own campaigns if you collaborate with the right micro influencers!

Given that they are cheaper than the big name social media influencers, you can even counter the downside of their decreased reach by working with more at once! You may even find that this is a much more cost-to-value efficient way for your business to get into influencer marketing.