Whether you’re strictly business or getting personal on Twitter, keeping your Tweets attractive and followable requires a little attention to detail. And gaining followers isn’t as easy as losing them, so avoid these ten common Twitter mistakes.

Excessive tweeting and self-promotion are among the many faux pas that will get you unfollowed or reported for spam. They come in three all too typical varieties:

Binge posting: There’s nothing more annoying than a column of Tweets all from the same person (or brand) posted in three minutes.

That was three-weeks-worth of Tweets in one evening. Sorry to overload your Twitter streams. Good night universe.

The multi-tweet: Remember this is a microblogging service. Being brief is the name of the game. If you need more than 140 characters to get your point across, then write it out in a blog and Tweet the link.

Pointless Direct Messaging (DM): There’s no need to send direct messages to new followers thanking them for their interest. Especially if you use this opportunity to direct their attention to your website or blog, you’ll see that follow quickly revoked.

On the Internet as in real life, first impressions are almost always visual, and your profile photo can set the tone for your content. So don’t stick with Twitter’s default profile image. Whether you’re Tweeting for your personal or professional brand, your profile image and cover photo should be well lit, cropped and optimized for web use.

The # symbol has had its own little renaissance thanks to Twitter. Hashtagging keywords or topics in your tweets is an effective means of tracking and participating in events, conversation and disaster recovery. But before you publish that Tweet, search your hashtags to make sure the results, if any, are consistent with your message.

And don’t add too many! A litter of hashtags will just cloud your message and make your tweet difficult to read. Lastly, avoid using the hashtag merely for #emphasis or #context. #Itsdumb.

If you’re on several social networks, change up your message and technique for each one, especially since they offer different formatting options. When Tweeting from another website (to share their content on your timeline) you’ll often have the Tweet written for you. Edit that Tweet and give it a bit of your own style before publishing.

Grammar and spelling mistakes significantly reduce the impact of your content. Take a minute to proofread your Tweet. It’s not just your content’s readability and attractiveness at stake, but repeated errors can get you ignored or reported for spam; not to mention being ridiculed by Twitter’s grammar police.

85% of corporations will not hire you at a higher level, without first viewing your dinner etiquetcy skills first

6. Don’t get involved in debates.

Tweeting your brand can be tricky when tempers flare. But one directive is to never, ever go on the offense. And never use abusive, threatening language (that should really go without saying). If you haven’t already, it’s a good idea to draw up some social media guidelines for your team to follow.

The more you Tweet, the more likely you’ll be Retweeted and replied to, building your audience on the social network. (Just avoid the habits discussed in point 1.) Keep your profile complete, accurate and updated. Tweeting regularly (with great content, of course) will attract more followers faster.

If you’re going to ask for a Retweet, do it right.

There have been some moderate (and debatable) success stories, like Chipotle’s fake hack. But follower backlash can generate a whirlwind of negative PR. It’s a risky move especially with today’s cyber sensitive headlines. So if you’re going to do it, at least be creative enough to give it a concept, or some clue that it’s a prank. 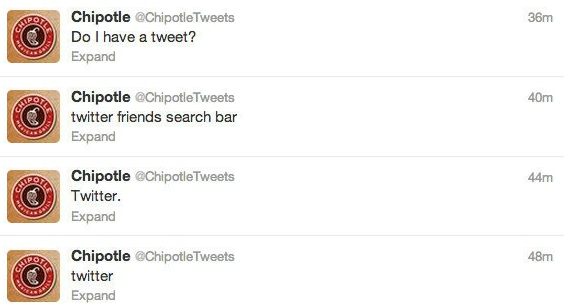 Every social network has its own etiquette, terminology and subcultures. If Facebook is one big living room, Twitter is one big cocktail party. So strive to be personable but avoid overly personal topics. Just stay on your beat and write (and Retweet) relevant and interesting content. This and the preceding don’ts should keep your followers multiplying and anticipating your next Tweet.