In addition to the displayed number of views, YouTube has a unique rating system that allows users to show whether they Like or Dislike a video, created in order to level the playing field and distribute content. Before March 2010, a 1–5 star rating system was used; a video could get more or fewer views based on this scale of popularity.

We analyzed nearly 5,000 brand channels with more than 28,000 videos over the course of one month. In general, people tend to Like YouTube videos more often than Disliking them. The average Like/Dislike ratio is 90%; this means that for every 9 likes, there is 1 dislike. As can be seen in the chart below, only 4% of videos have more dislikes than likes, and 73% of the new videos posted in August received more than a 90% share of likes in the total rating (Likes+Dislikes). 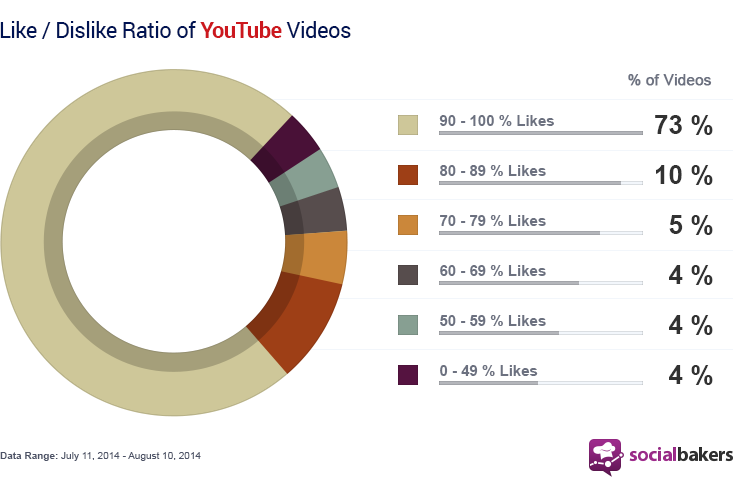 Why are ratings so positive?

There are two things to consider when judging the relative success or failure of any Youtube video by its rating. First, given the absence of a constantly updating News Feed, Youtube is less likely to introduce users to "cold content.” Ads certainly still reach their audiences, but there is no equivalent to the Facebook Timeline for P2P sharing within the network itself, so content will, more often than not, either be something a user has searched for or been recommended to – meaning it is more likely they will be exposed to videos they like than videos they dislike. Also, as the Dislike action is unique among major social networks, taking that action might seem a bit unnatural for users who divide their time among other networks (potentially making a case for social networks to expand with similar features).

Looking at the Top 30 most-rated videos (based on the number of user ratings) from this period, the average Like/Dislike ratio was 91%. The most popular video was made by GoPro – it experienced 17,387 likes and 131 dislikes, for a 99% positive rating. The video that was rated most poorly was made by DoritosMX. Its negative rating, 16%, meant that the video received 5 times more dislikes than likes – 1,978 likes to 10,535 dislikes. Highly unusual, since to Like something is the most common action people take on videos.

Perhaps they could have benefited from making a shorter video. It is important to find a middle ground when it comes to the length – the videos that garner the most views are typically with a length of 31–60 seconds; whereas videos that exceed 5 minutes are next to the least commonly watched.

– The shortest videos are generally the least commonly watched

– Videos longer than 5 minutes are the next least commonly watched, but that does not hold true for all industries.

We took a look at Industry-specific video performance by length, and discovered that the Fashion industry, for example, outperformed other industries in the shortest video segment – 0 to 15 seconds. It was only the Software and Services industries that performed the best with videos longer than the 31 to 90 second range; they tend to be videos that last up to 5:00. 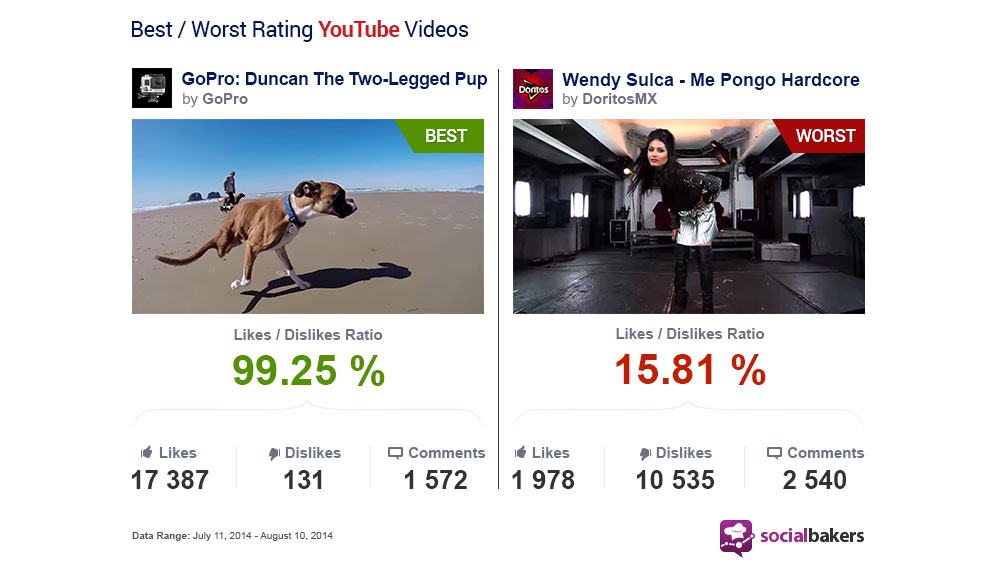 GoPro has over 2,100,000 subscribers, whereas DoritosMX channel only has about 2,500. Since GoPro has more subscribers, it also means that they have more exposure. Furthermore, the number of Raters (users rating the video) was also higher for GoPro. The goal is to make content that people want to share because the more popular the video becomes, the higher your view rate can go. It’s important for brands to keep an eye on how their video content is performing in order to improve.

Not all industries perform the same on YouTube. Some brands generate more videos than others and have various lengths- the majority are somewhere between 31 to 120 seconds long, yet videos in the 31 to 60 second range receive more views than the any other time range. With Socialbakers Analytics, you will be able to monitor what type of content your fans find most engaging, as well as the time of day your target audience was most engaged with your videos. It is imperative to not only understand your performance, but that of your competitors, too, in order to enhance your social media strategy.