Avon is a multinational cosmetic, skin care, fragrance, and personal care company based in London. In Brazil, it's one of the biggest and most popular makeup brands. Avon has been leading a movement for more diversity in Brazilian advertisement with the claim "makeup is for everyone" and a diverse cast of digital influencers. In 2021, Avon became one of the sponsors of the reality show Big Brother in Brazil. Big Brother Brasil engages millions of social media users, so Avon wanted to use the opportunity to reposition its brand and make consumers look again at its products, purposes, and sales force.

Avon recognizes that data is fundamental to understand the audience perception of a brand and promote the best customer experience. However, Avon knew it would be challenging to anticipate the conversations and arguments that occurred inside the house, and position itself in a relevant way as a brand. Big Brother Brasil is a live program that is constantly changing, so Avon had to be prepared to change along with it.

With Emplifi, Avon was able to capture the public's reaction and response to the show’s events in real-time. Avon also used Emplifi to track conversations and receive an automatic export of comments weekly.

"This dynamic of information in real-time was essential for us to understand how we would position ourselves and what content would be released on a daily basis, besides helping us change the course of the conversation, when necessary," said Viviane Pepe, Communications Director at Avon.

Number one in engagement and follower growth

During the reality show’s 100 days, Avon tracked its Big Brother Brasil-related content on social platforms in real-time. Emplifi helped Avon understand what the followers were saying about its content, especially when it involved mentions to the reality show contestants, which also allowed Avon to optimize its content strategy in real-time.

Avon also used Emplifi to create daily reports to understand the evolution of followers and interactions, monitor other sponsors, and optimize investments in promoted posts. While Big Brother Brasil aired, Avon was number one in engagement and follower growth on Instagram and Twitter compared to the other Big Brother Brasil sponsors. 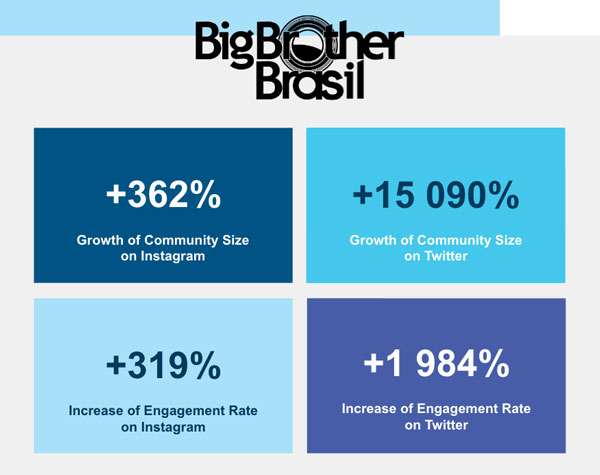 "Emplifi was key to have a qualitative look at content and interactions, measure audience engagement with special actions during the show, and the popularity of the participants," added Pepe.

Avon wanted to understand the impact its Big Brother Brasil sponsorship had on its brand and digital presence among the reality show audience. With Emplifi, Avon was able to track its content in real-time, which allowed the company to optimize its content strategy.

Do you need help optimizing your social media strategy? If you’d like help understanding how your audience responds to your content, request a demo with an Emplifi expert today.