Conversational AI: what it is and why your IVR desperately needs it

No chatbot is complete without strong conversational AI capabilities. This foundational tech is what differentiates chatbots that are basically glorified FAQ pages from chatbots that can closely mimic the experience of interacting with a live agent.

Chatbots with true conversational capability have the power to revolutionize that last bastion of old-school customer service, the interactive voice response system (IVR). Nobody enjoys calling a 1-800 number and trawling through endless menus to find the one that matches their issue. A bad IVR experience leads to higher escalation rates, more frustrated customers, or worse – customer churn.

But before we dive into how conversational IVRs can save the day, let’s start with some definitions.

What is conversational AI?

Conversational AI is an application of artificial intelligence that enables human-like dialogue between people and computers. In other words, it makes a conversation with a computer feel more like a “real” conversation.

How does conversational AI work?

Conversational AIs must be able to:

The highest caliber of conversational AI allows you to complete a task or transaction with no more effort – and possibly even less effort – than it would have taken if you were communicating with a human. (As a bonus, no need to make awkward small talk!)

How could I use conversational AI for my business?

Over the course of a given day, how many times are customers communicating with one of your agents (whether sales or service) via a voice or digital channel? How many of those transactions follow a more or less predictable pattern? These instances provide the best opportunities to automate with conversational AI.

Think about the steps an agent would take to resolve the following customer issues:

These common transactions, like the examples above, are fairly predictable. This makes them perfect candidates for automation. Conversational AIs can follow the same patterns human agents would follow to complete transactions.

When we think of customer service automation, of the processes we’d typically try to automate or enable customers to self-serve, it’s easy to limit our thinking to a simple “ask a question, get an answer” (like an FAQ). But what conversational AI enables us to do is have a back-and-forth dialogue to collect the information needed to complete the transaction.

Incidentally, offloading the most repetitive cases from agents sets companies up for greater success in an environment where consumers expect 24/7/365 immediate service, and frees up agents to focus on more challenging or value-added work.

A conversational AI interaction can take place in two main types of channels:

Text-based channels are generally simpler to implement and are thus more common. We’ve covered best practices for service interactions on SMS, web chat, Facebook Messenger, and WhatsApp before – with text-based channels, it’s all about being easy to engage in the consumer’s channel of choice, clearly communicating what the chatbot can and cannot do, interacting in the most helpful way possible, and enabling escalation to a human agent when desired.

The ability for a bot to…

…are all core capabilities for any AI-driven chatbot. In a text-based interaction, this is a fairly straightforward experience.

However, voice-based channels bring a whole other set of challenges and complexities.

Conversational IVR and the need for duplex conversation

People talk differently than they type, and they have different expectations for how a voice interaction will go. In the context of conversational IVR, a chatbot must also be able to:

Processing what you’re saying as you’re saying it might sound easy, but it’s actually very challenging for most modern AI technologies to pull off. Think about text-based chatbot conversations. The bot can’t see (or begin processing) your typed text until you hit “Enter” – then it sees and analyzes your complete thought all at once.

But that’s not how voice conversations work. When two friends are talking, they are processing what the other is saying in real-time as they speak. Duplex conversation enables a chatbot to process spoken text in a similar way, vs. waiting until the speaker has finished their statement to begin the work of processing their intent and meaning. That’s why duplex conversation is key to a top-notch conversational IVR experience.

Here’s a closer look at a common transaction an agent might help you complete, and how a conversational IVR could automate that process.

Let’s say you want to book a flight. There are a few key pieces of information that an agent will ask you for:

The agent on the other end of the line would probably ask you these questions one right after another, and then enter the information into their system to find available flights for you.

But what if you never needed to talk to an agent to do this?

Imagine if you dialed the airline’s number, got the IVR, and instead of wading through menu after menu, you could simply say, “I want to fly from San Francisco to Paris on November 12.” The IVR, powered by an AI-driven chatbot, can parse what you are saying (as you are saying it) to make a few determinations:

Based on making these determinations, the bot has two “blanks” to fill in regarding airports, and therefore two follow-up questions for you. Based on previous knowledge of the most popular airports in these locations, the bot could ask:

Once you’ve confirmed that information, the bot can offer departure time options and help you complete the booking transaction. Each of these steps is defined by business rules, which essentially create paths the bot can follow that are similar to the processes your human agents would follow in the same situation. But where AI and machine learning come into play is how the bot decides which path to take. 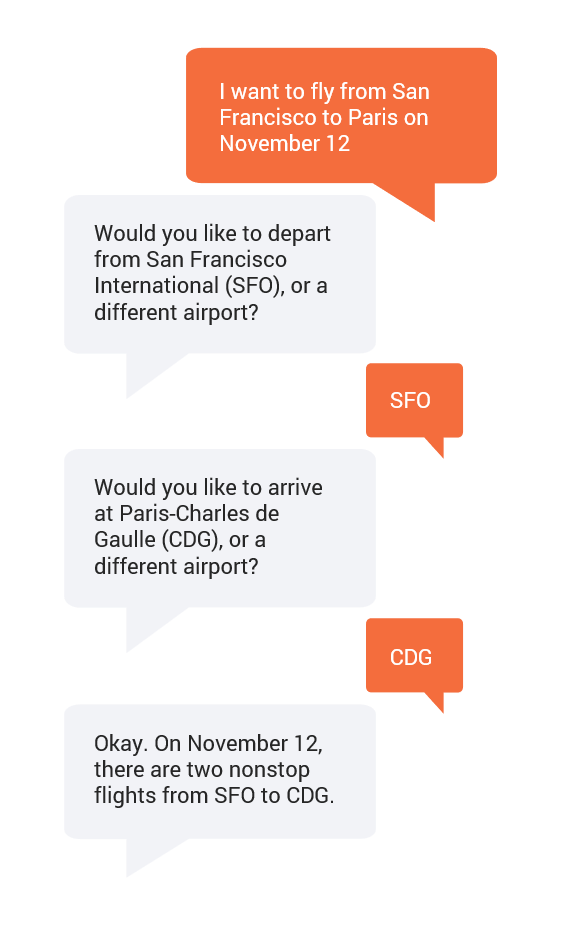 One more element to consider in a voice-based conversation: the ability for the bot to communicate with a customer on multiple platforms simultaneously, called multimodal communication. For example, once your booking is complete, the bot could send you the confirmation message via SMS while it’s still “wrapping up” your phone call. It’s an added value that makes the experience even more seamless for the customer.

This is just one example of how the routine transactions and questions live agents deal with over and over, day after day, can be automated with conversational AI to ease agents’ workload, improve cost-per-contact, and reduce customer effort to improve CX.

At Emplifi, we help enterprises all over the world better understand their customers’ wants and needs, and deliver them seamlessly. Learn more about our award-winning chatbot solution or schedule a demo to see it in action.

Editor's Note: This article was originally published on astutesolutions.com. Any statistics or statements included in this article were current at the time of original publication.