As most would expect, the worldwide pandemic has had an effect on brands’ social media strategy and performance. This can be seen in a variety of areas, including a lower demand for paid ads on Facebook, the increased performance of organic content, and perhaps a hidden opportunity for brands that do have some budget to spend and increase their reach because of the lower costs of ads on Facebook.

Because people have been forced into social distancing at home, they have more time to consume social media content and as a result the supply is trending up. That has also created new possible opportunities for smart marketers to create engaging content.

Socialbakers analyzed data across 18 industries and five regions worldwide, looking at recent trends in cost per click, ad spend, click-through rate, and more. In summary, the decrease in paid advertising can be seen across all metrics, while the trends have a correlation to the relative regional spread of, and recovery from, COVID-19.

For example, as of late March the metrics in East Asia have begun to rise as the region has moved into a recovery phase. With data updated through April 20, we have also seen similar upward trajectories throughout the rest of the world.

Looking at some specific regions, ad spend increased by 47.3% in Northern America, 41.6% in Latin America, and 35.7% in Southeast Asia. Meanwhile, Facebook CPC increased by 20.6% in Western Europe and 16.2% in Southern Europe.

Based on the timeline of East Asia's paid advertising figures returning to their pre-pandemic levels, we expected other regions to similarly bounce back once they got the coronavirus under control. While it's far too early to say that COVID-19 is behind us, it's been largely contained in many areas and worldwide there's a confidence that things will return to something close to normal. 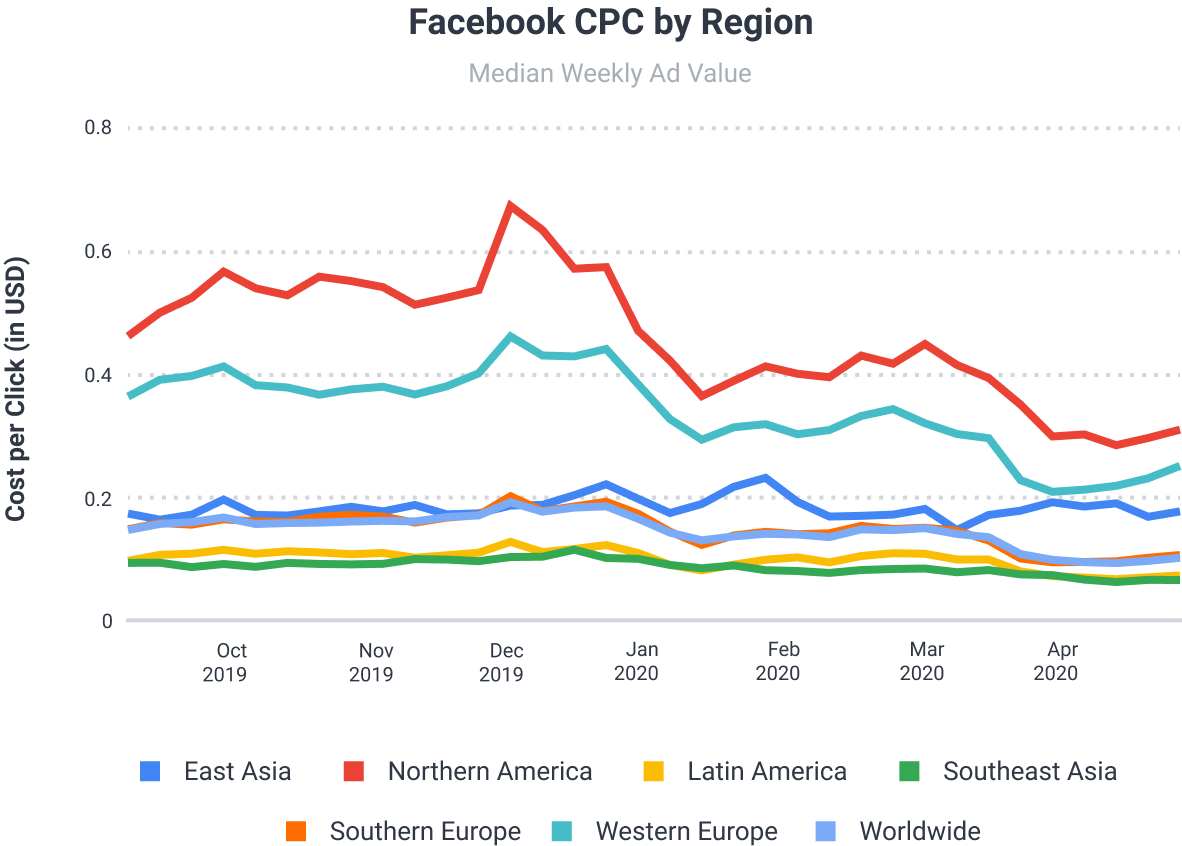 The overall reach for brand pages on Facebook went down starting in mid-March. However, brands that supported their posts by taking advantage of the lower ad costs saw a 28.6% increase in page reach from March 13-April 13.

This was the rarity, though, as fewer brands either chose to or were able to put ad spend into their campaigns. 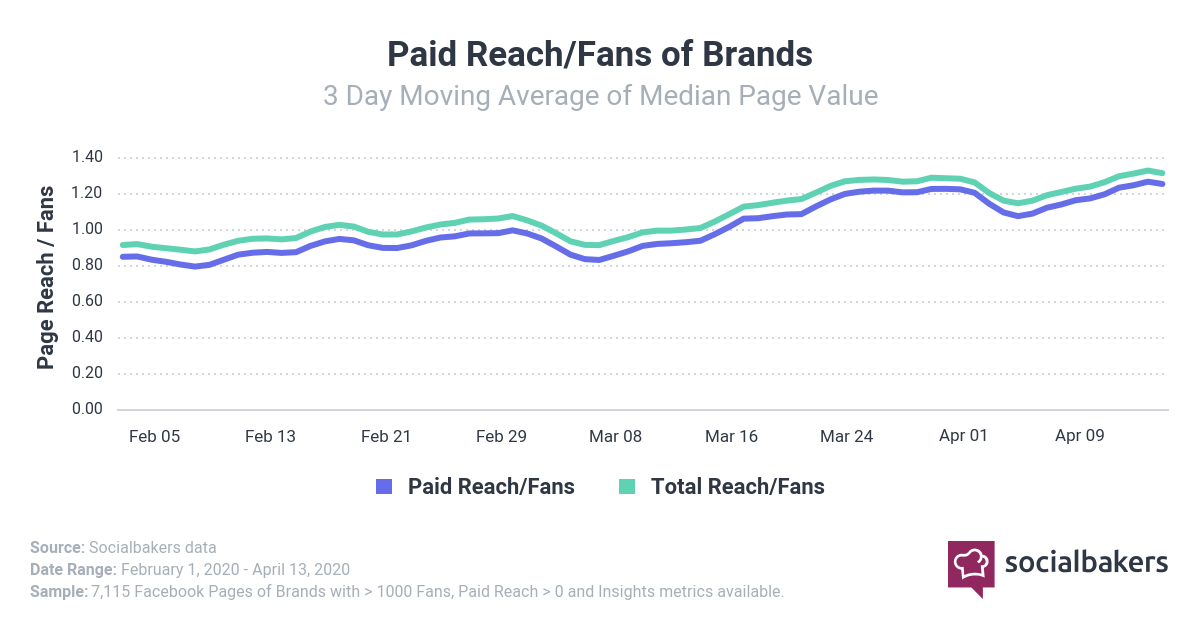 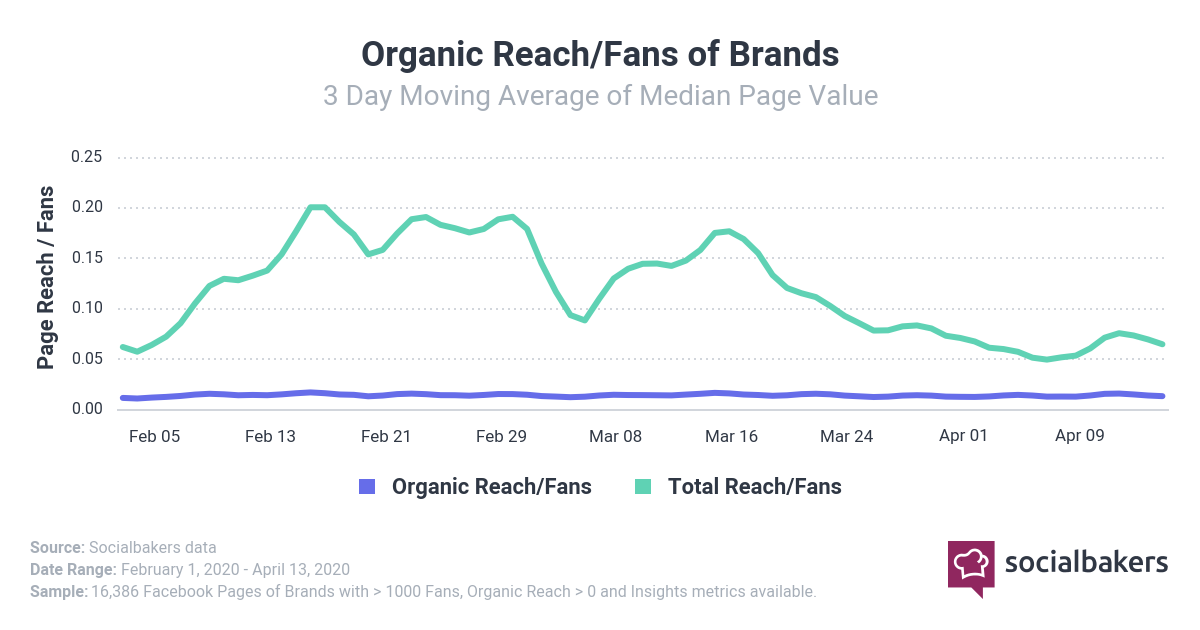 Similar to cost per click, there’s been a decrease in CPM across the board of all industries that Socialbakers analyzed. For Brands overall, the most recent figure ($0.810) is less than half of the previous seven-month high in late November 2019 ($1.883).

Looking at some specific industries, Telecom experienced the same decrease as most industries in early 2020 and has continued to decline in recent weeks. Electronics mirrors the trends in Brands overall, as its previous seven-month high at the end of November ($1.524) is more than double its current CPM ($0.602). 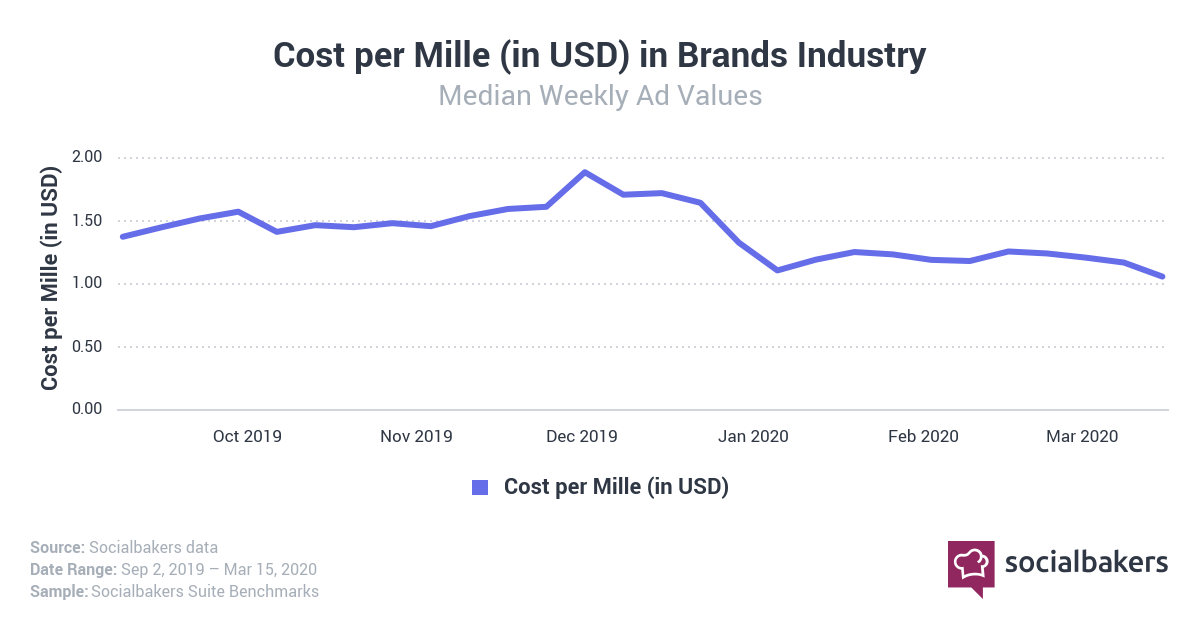 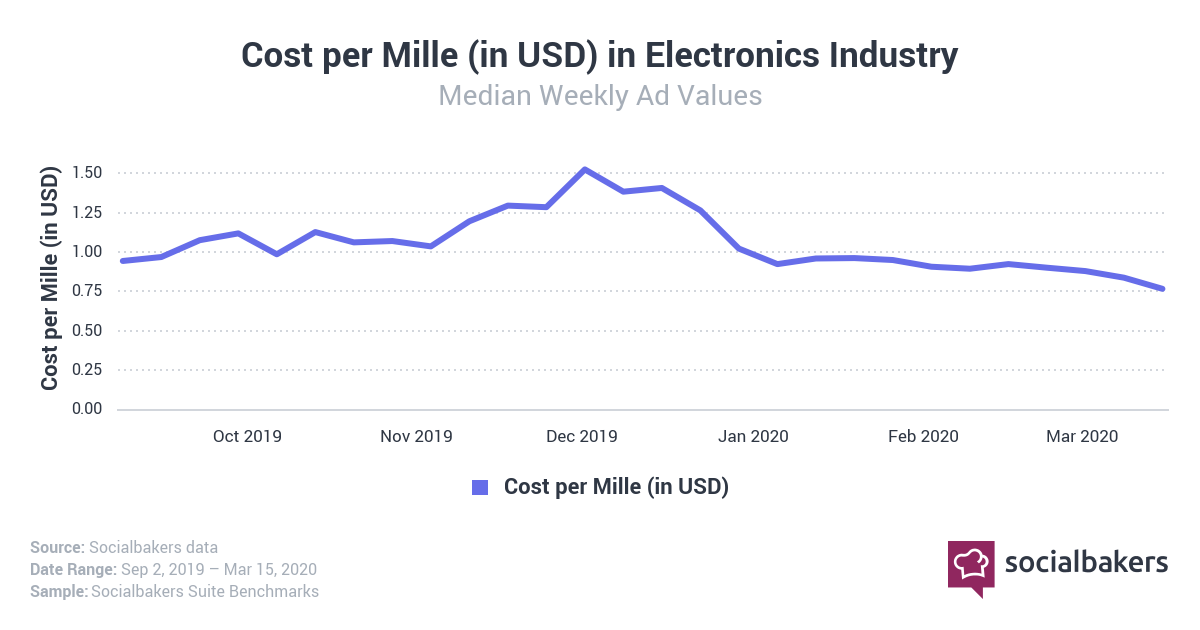 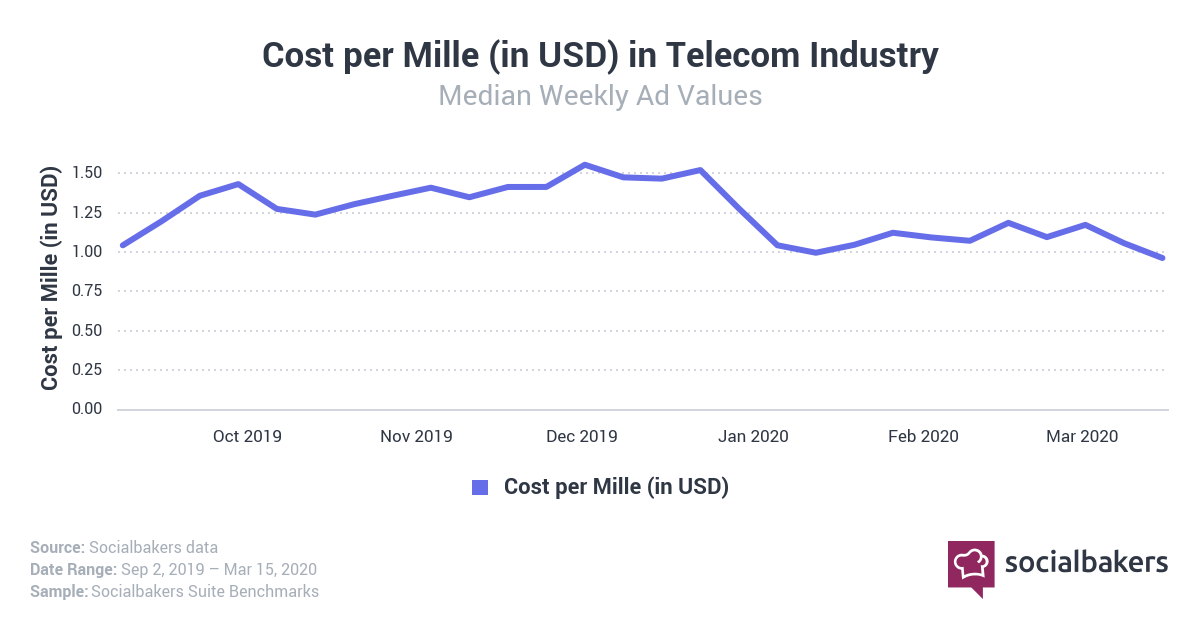 Regionally, the CPM in East Asia has bounced back to about where it was seven months ago. However, the other regions, which are still in the midst of the pandemic, have steadily declined in the new year.

As Northern America is just starting to feel the impact of COVID-19, during mid-March, the CPM is starting to drop, as we have seen in Asia back in February 2020. 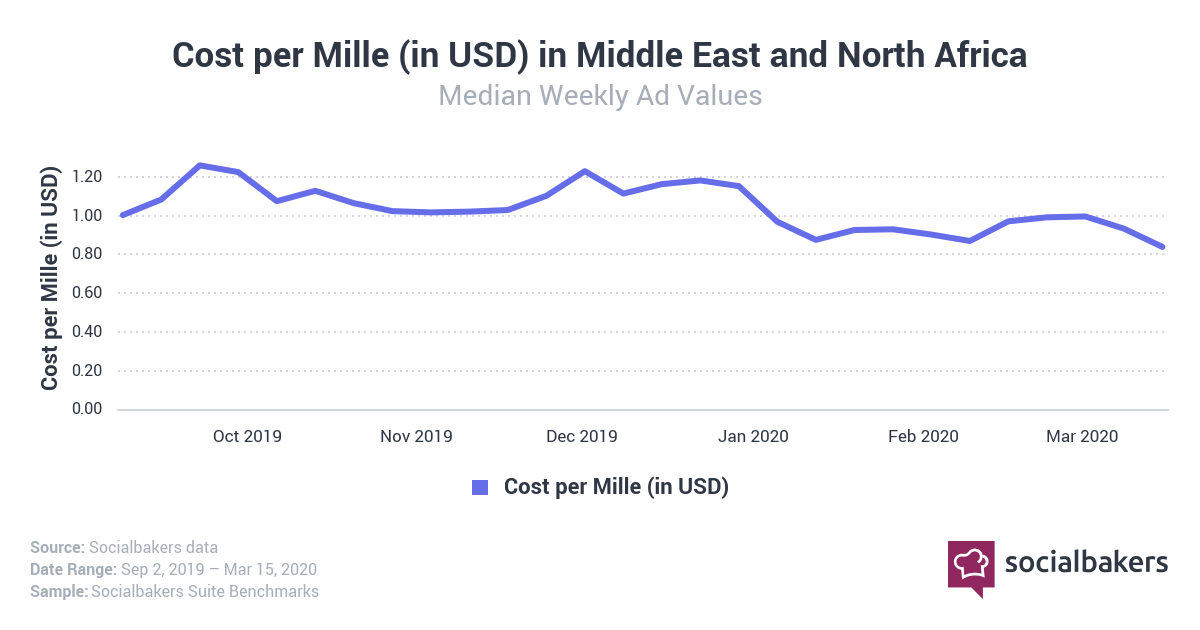 Not surprisingly, the Facebook CPC has decreased, making the cost to advertise much lower for nearly every industry that Socialbakers analyzed.

The lowest ad costs have traditionally been after the new year, and because of this situation that trend has continued into spring. That means there’s a possible opportunity for brands that have the budget to make their message go to a wider audience than it normally would.

Regionally, the decline and recovery in CPC has followed the spread of COVID-19 and its impact on each region. Overall, CPC has been slowly declining since the start of the year across all regions (Western Europe, Southern Europe, Northern America, East Asia, Southeast Asia, MENA).

However, in East Asia the CPC has started to pick up again as business starts to take off again in the region. This is a positive sign that other regions will start to recover after COVID-19. 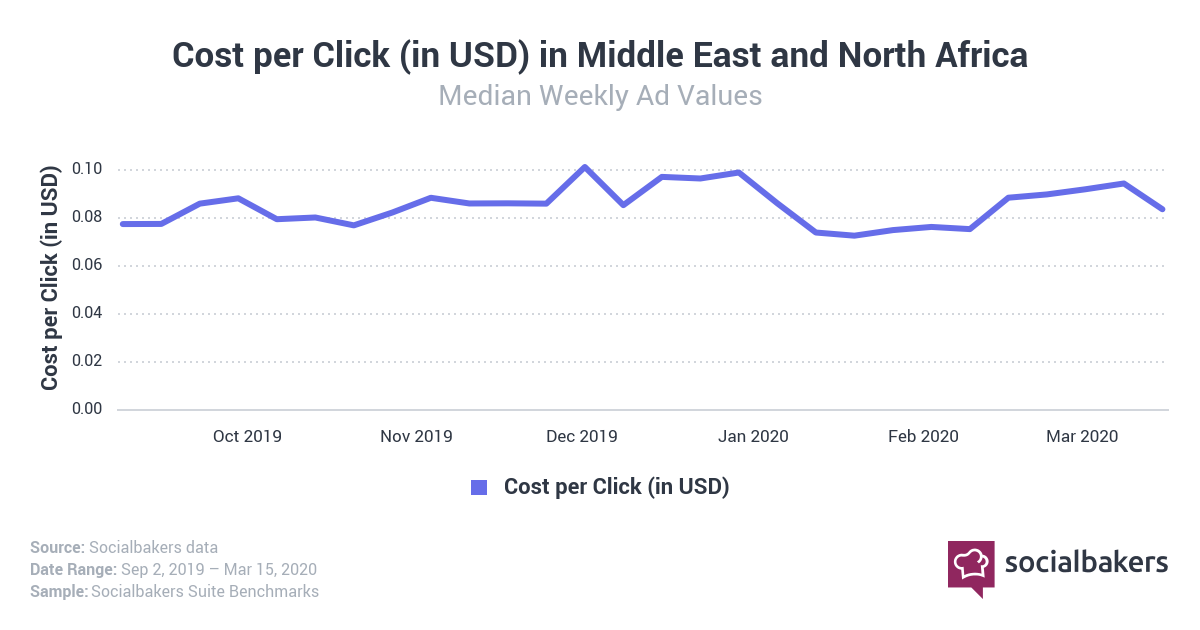 As people are engaging more with organic content than paid, the CTR for all Brand accounts has declined by 17.2% since the new year. This is an opportunity for brands to push more organic content as it is seen as more authentic and reliable at a time like this.

Looking at some specific industries, the Beverages sector has remained steady with only slight variations over the last seven months. Meanwhile, one of the industries hit hardest by the pandemic, Accommodation, reached a high CTR of 1.84% in mid-January and has decreased by 18.5% over the last two months.

Regionally, as East Asia is recovering from the impact of COVID-19 earlier this year, the CTR has been climbing back over the last month. It has mostly declined in all other analyzed regions (Western Europe, Southern Europe, Northern America, Southeast Asia, MENA). 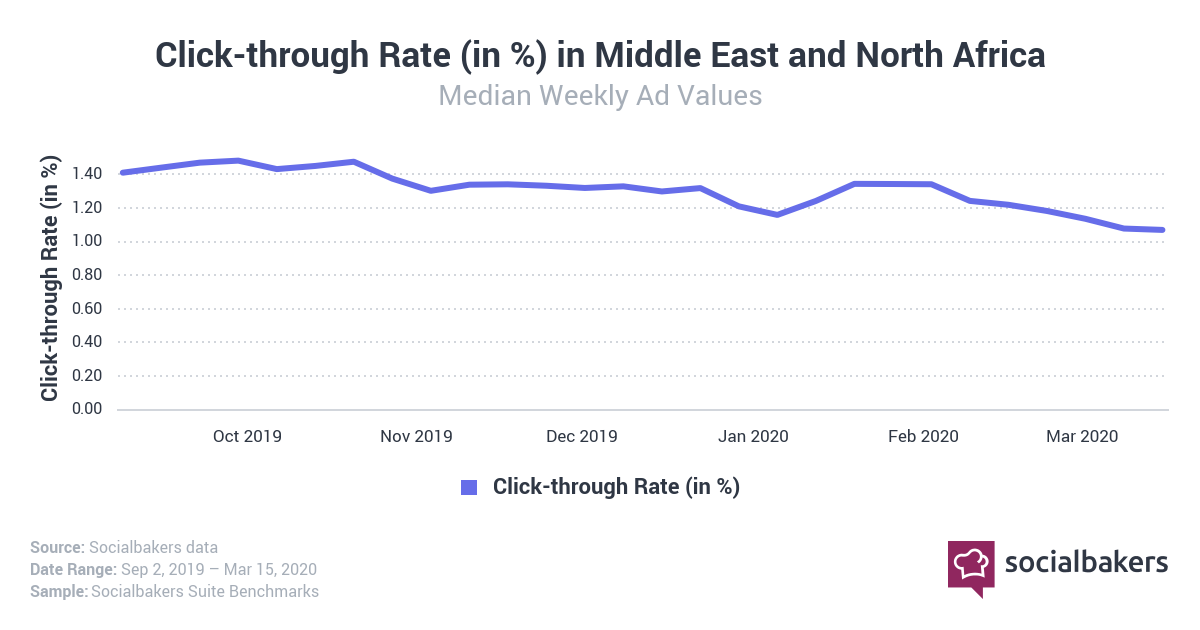 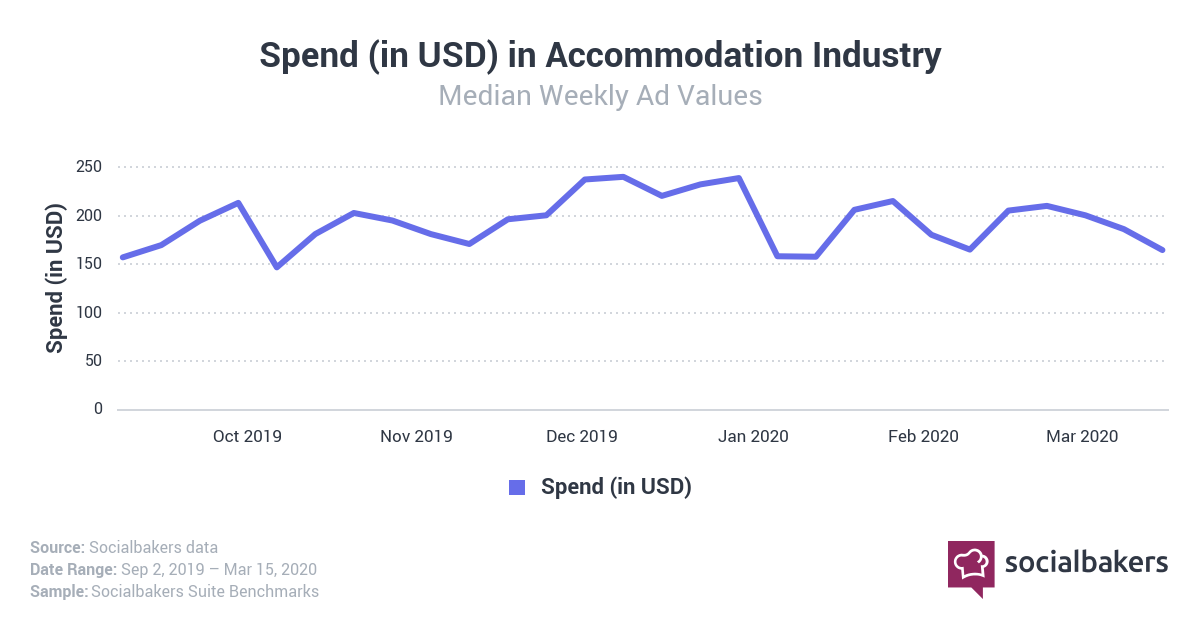 As in other cases regionally, East Asia is mostly on the other side of this pandemic and its ad spend has picked up and surpassed where it was seven months ago. The other regions have been declining, with the most dramatic results in Northern America, where the pandemic currently has center stage. 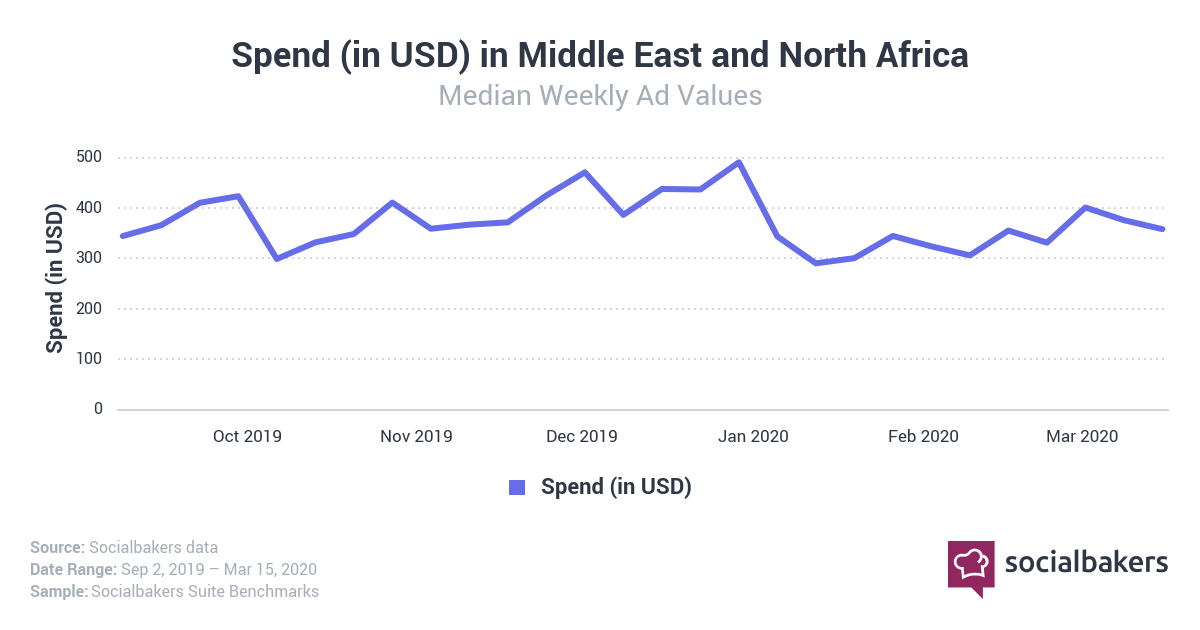 The brands that are being proactive and making contributions to their communities and employees have seen the most engagement on Facebook and Instagram.

Looking at posts related to coronavirus over the last month and a half, the post that got the most interactions on both platforms came from Brazilian brewery Ambev, which announced that it would use its production lines to make 500,000 bottles of hand sanitizer for local hospitals and the cities hit hardest by COVID-19.

The other top posts on Instagram came from two Italian car companies. Ferrari pledged €10 million in support of the crisis while Bugatti expressed its sympathies to the people of Italy, one of the countries hit hardest by the pandemic.

On Facebook, the other top posts came from Home Bargains, a U.K. discount chain that announced a £30 million fund to support its employees, and US-based Skrewball Whiskey, which on March 16 pledged to donate $1 to the bartender’s emergency assistance program for every share of the post (up to $500,000).

Brands across all regions have consistently posted fewer pieces of paid content in 2020. Not all of this can be attributed to COVID-19, but as the trend continues it has become clear that some of it is related to the tightening of budgets. 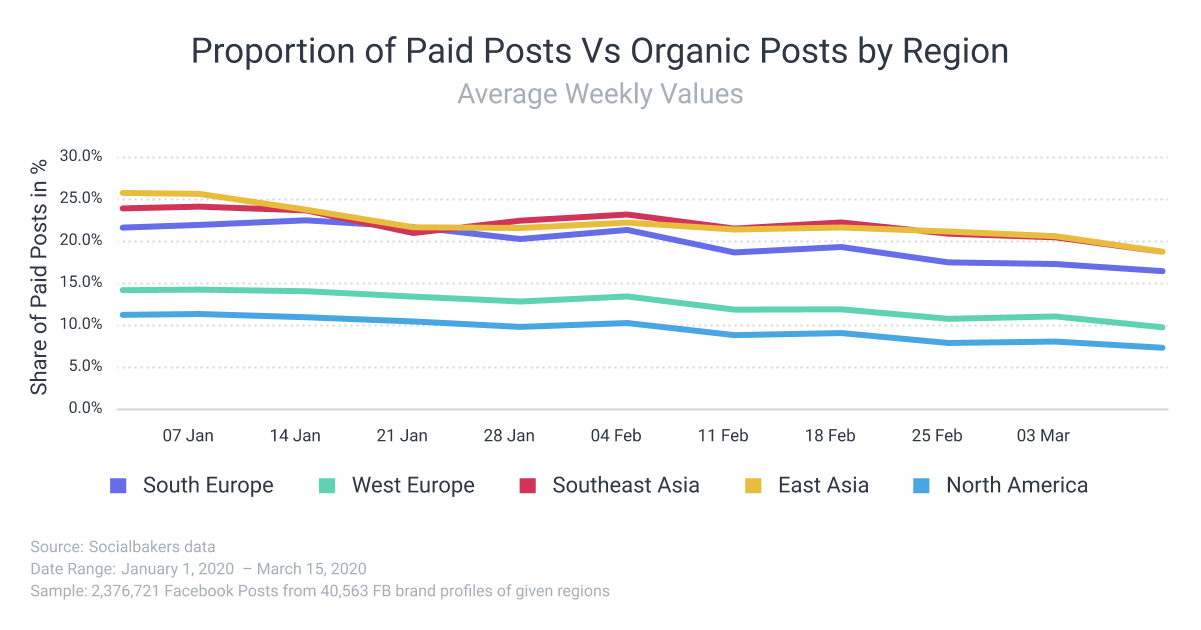 As a result, organic posts have increased slightly across all regions since the start of the year. This trend is expected to continue as businesses look for less costly alternatives to engage their audiences. That means that organic strategies driven by the right content may win during this period.

Backing up what you might expect considering the situation, Socialbakers data suggests that fans of Facebook Brand pages in Europe have been spending more time online every day in recent weeks.

As more and more companies have settled into home office situations, the percentage of fans who have seen Facebook posts on brand pages has increased a little each of the last three weeks. The peak time every day of the week is 8 p.m., and when looking at the most recent week compared to the last full week of February, the activity increased by 16.1%.

And it’s consistent throughout the week. Looking at the same time frame comparison, there was an identical 12.3% increase in activity at 8 p.m. on both Sundays and Mondays.

The data shows an increase in March on the weekends, too, which means that marketers looking to take advantage of the lower ad costs could potentially find an audience any day of the week.

While it may change as people keep spending more time in their homes (and online), the overall engagement for both organic and paid content on Brand profiles has been mostly steady throughout the crisis.

This bears monitoring as many areas of the world have an indefinite period of working from home in front of them, but so far social distancing in the real world hasn’t led to a spike in social media engagement in the digital world.