Influencer marketing is on the rise and no one does it better than travel brands. From Paris to Hong Kong, influencers all over the world are getting their selfies on and their adventure craving fans are #LovingIt. We’ve sifted through our database of millions of influencer profiles to find the best Instagram travel accounts that you should follow now. Read on to see which influencers made it on our top 10 list.

Influencers come in many shapes and sizes. The bucketlistfamily is a prime example of this. The family of 5 sold everything they owned and traded everything they knew for a travel packed life. What started out as a 6-month family adventure soon turned into a lifestyle. 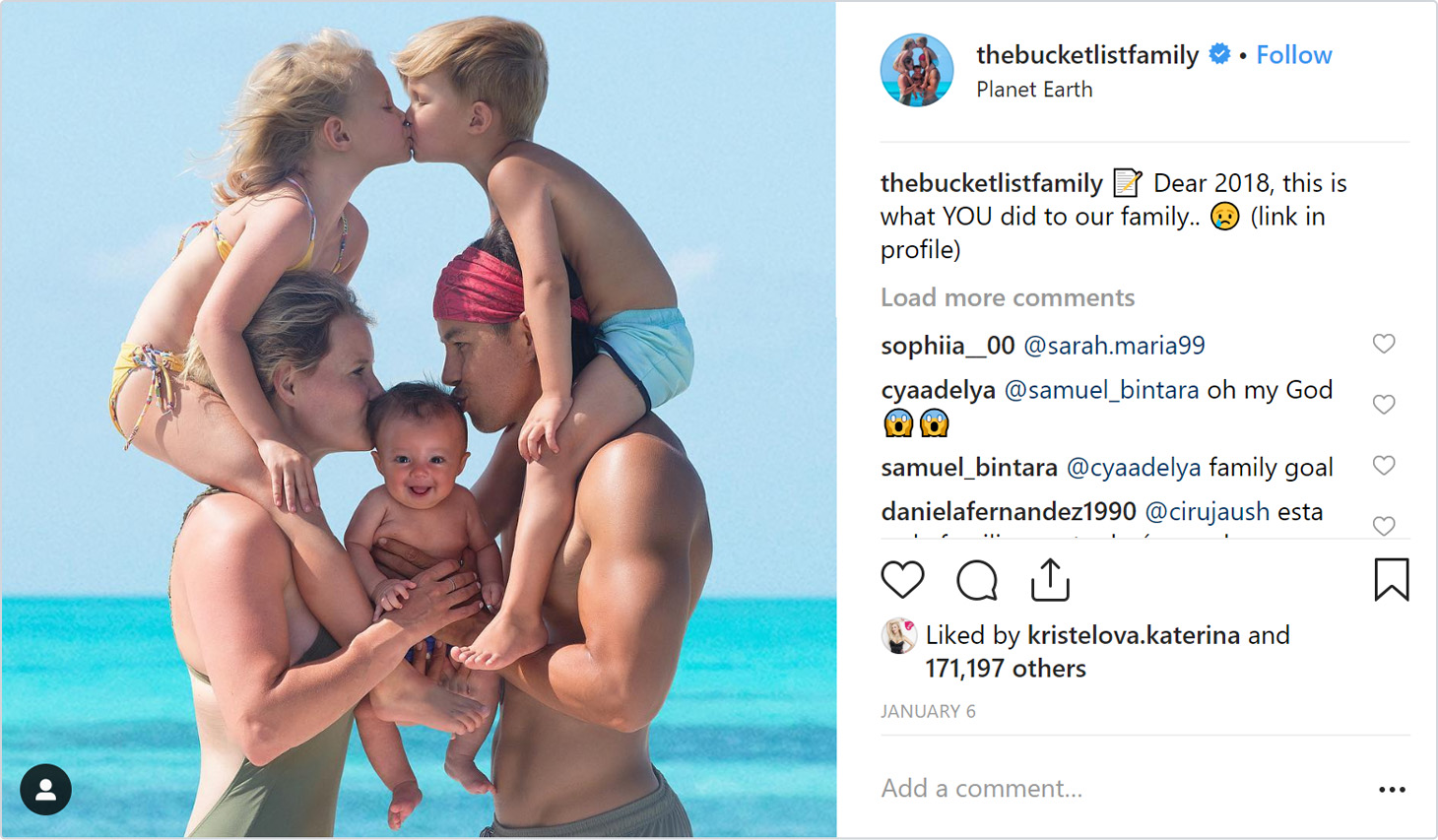 Today The Bucket List Family now has more than 1 million followers on Instagram and more than 300,000 subscribers on YouTube. Their content is not only highly visual but very personal, which makes them a great family-friendly option for travel brands on the lookout for influencers.

Using our Influencer Marketing platform, we were able to investigate their impressive scorecard, which is based on relative performance metrics in key areas such as: the sum of interactions, interactions per 1,000 followers, number of followers, and overall posting frequency.

We are happy to report that this family of journalists has built a truly loyal social media following which earns them a golden 87 - the highest score on our list! 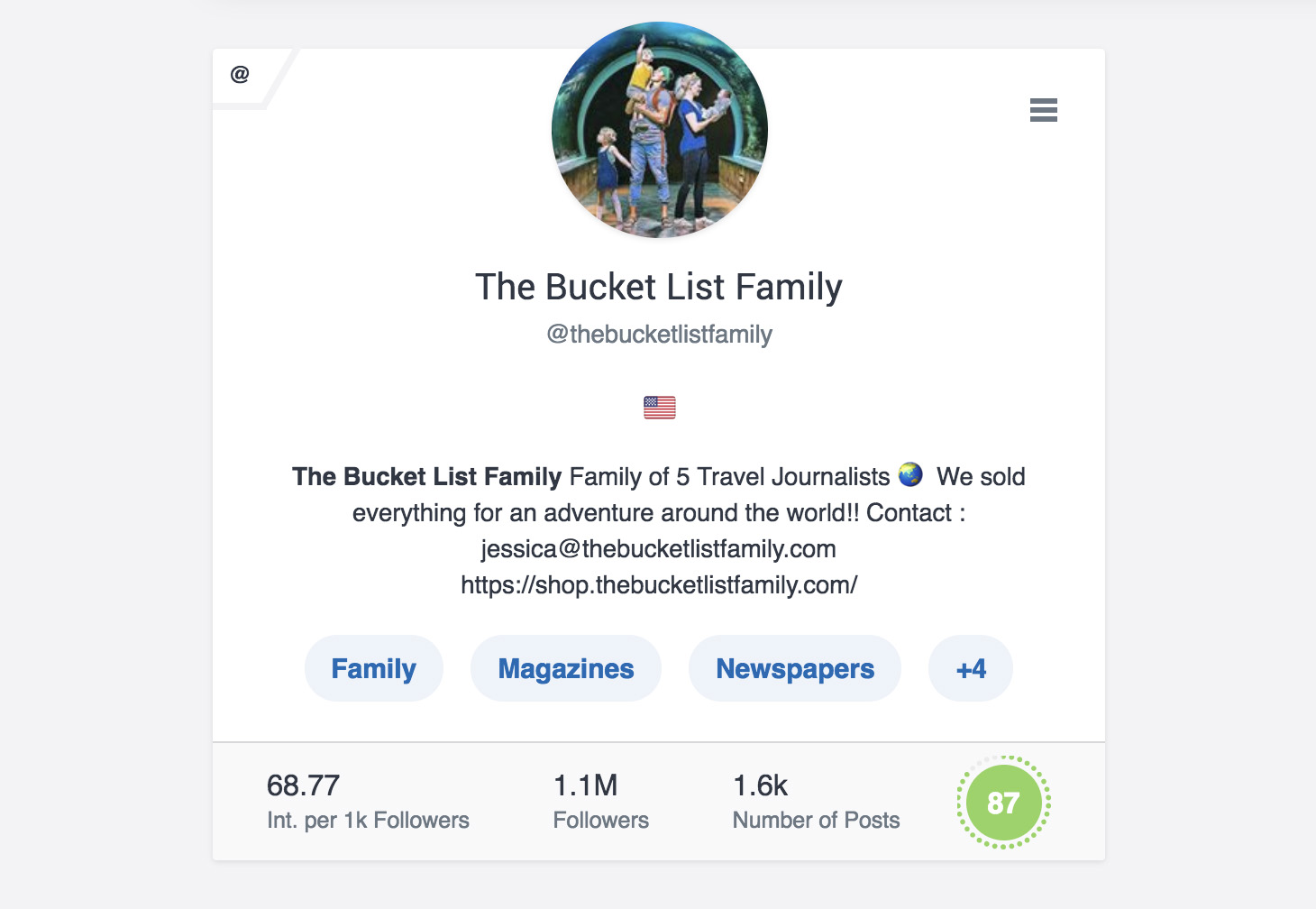 Don’t be fooled. Though Sanya is a talented fashion and beauty stylist, she also does her fair share of traveling. Originally from Slovenia, Sanya moved to London to pursue what she loves most: fashion, modeling, and music. 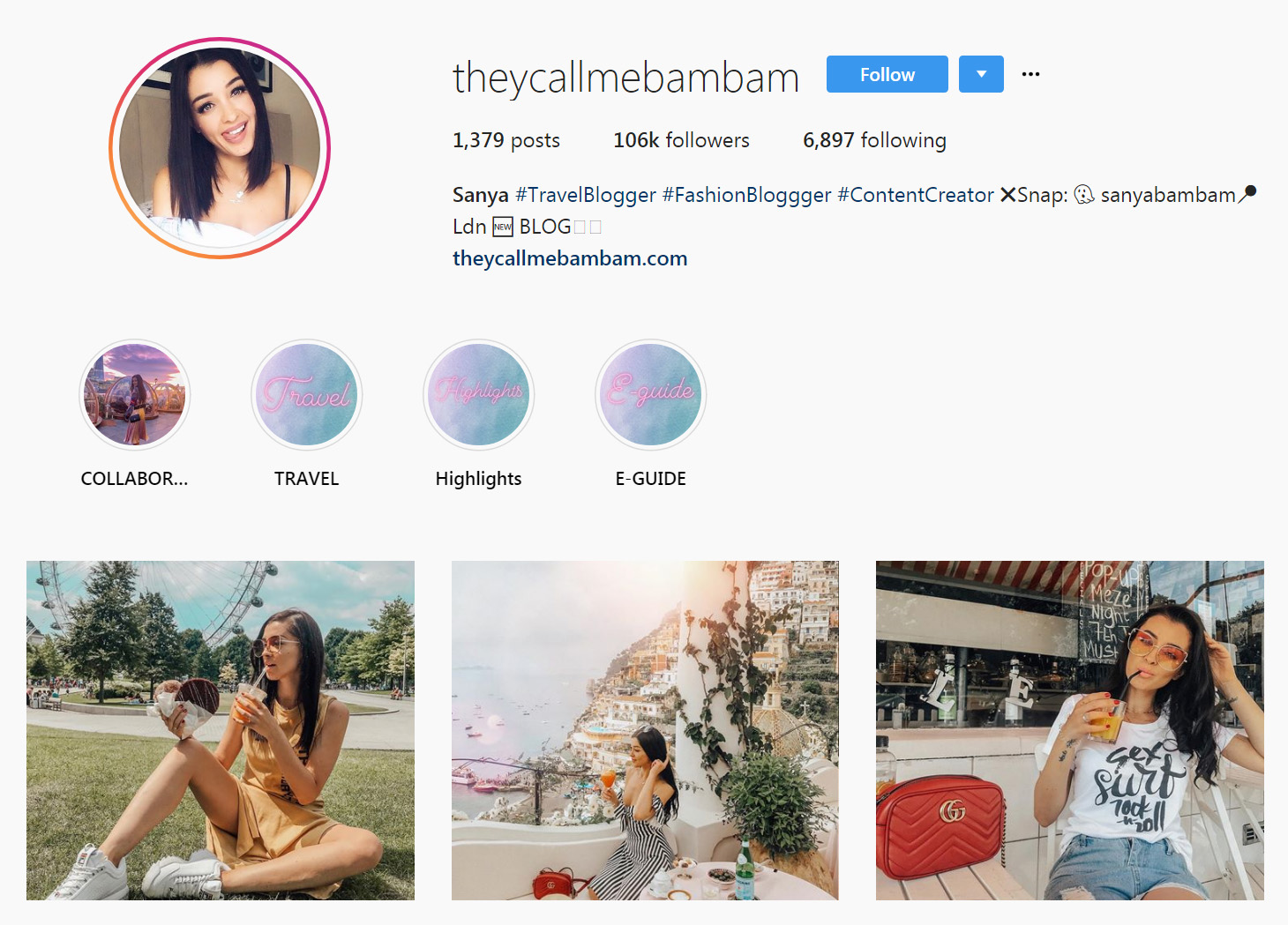 Since her move to London, she has used her Instagram account called theycallmebamabam, in addition to her personal blog, to record her journey - sprinkling fashion and beauty tips in along the way. She has more than 100,000 followers on Instagram and consistently freshens up her feed with engaging content. 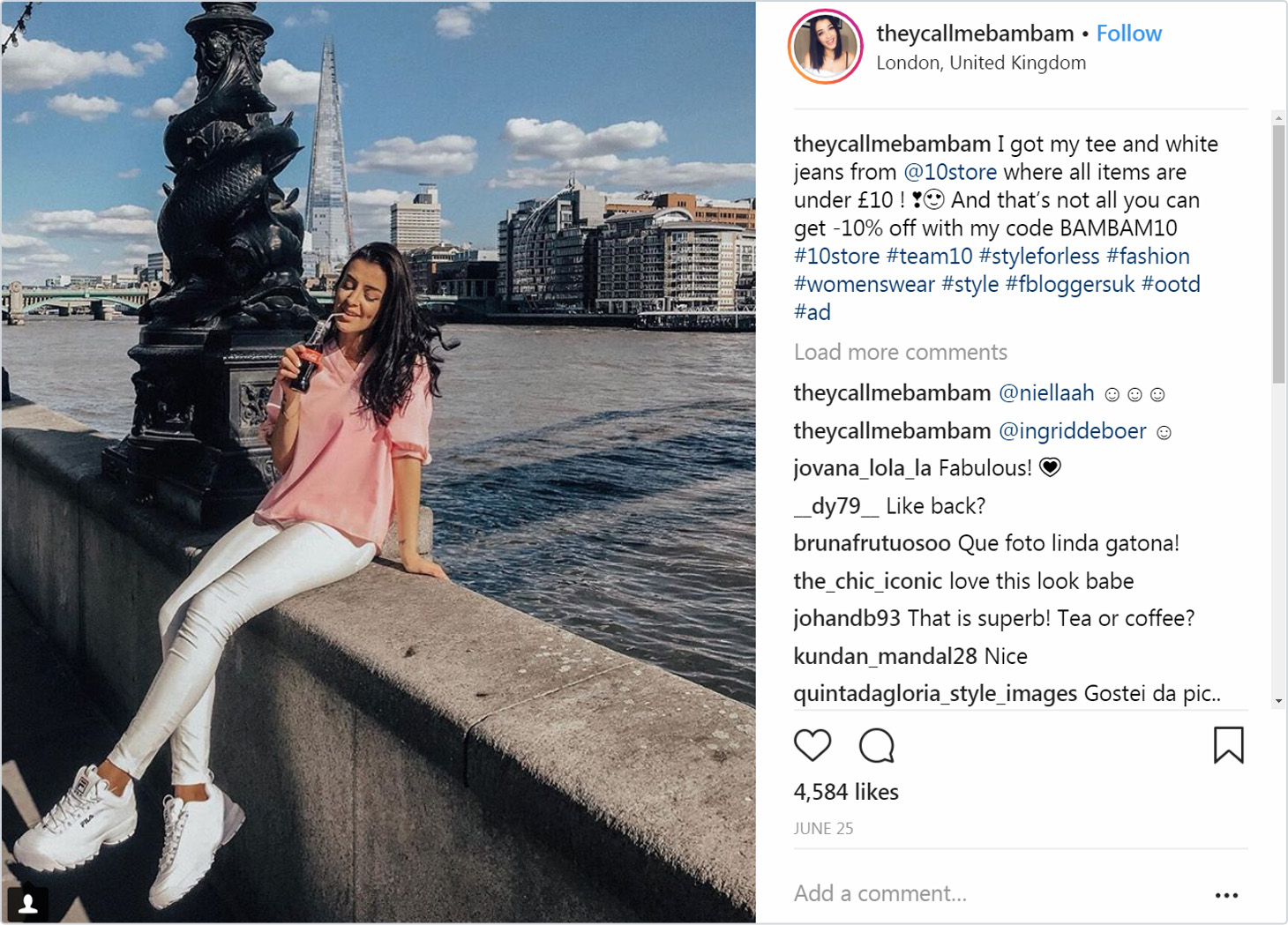 Even her branded posts get lots of love. Take a look at this sponsored post that garnered more than 4,000 likes from her fans. Sanya knows how to naturally incorporate advertisements into her feed and her community is grateful for the fashion-finds she brings them.

Though Sanya would be seen has a micro-influencer in some cases, her Instagram posts make a huge impression on her audiences. Audience size has nothing to do with the quality engagement she consistently receives from her fans. This is exactly why she makes it into the top three, receiving an Influencer score of 79.

Talk about #couplegoals. This traveling pair knows no bounds. After spending more than 15 years in the branding and advertising industry, the Dirnbergers decided something needed to change - drastically. In 2015, they said goodbye to their comfy life in South Africa and hello crazy experiences happening across all corners of the world. Sound familiar, doesn’t it?

Their Instagram profile is really where the magic happens. Their photo grid is a work of art, where all of their travel snapshots have been compiled to create a beautiful experience for their followers. Guess that’s what happens when you give two ex-creatives a camera and an endless supply of destinations. 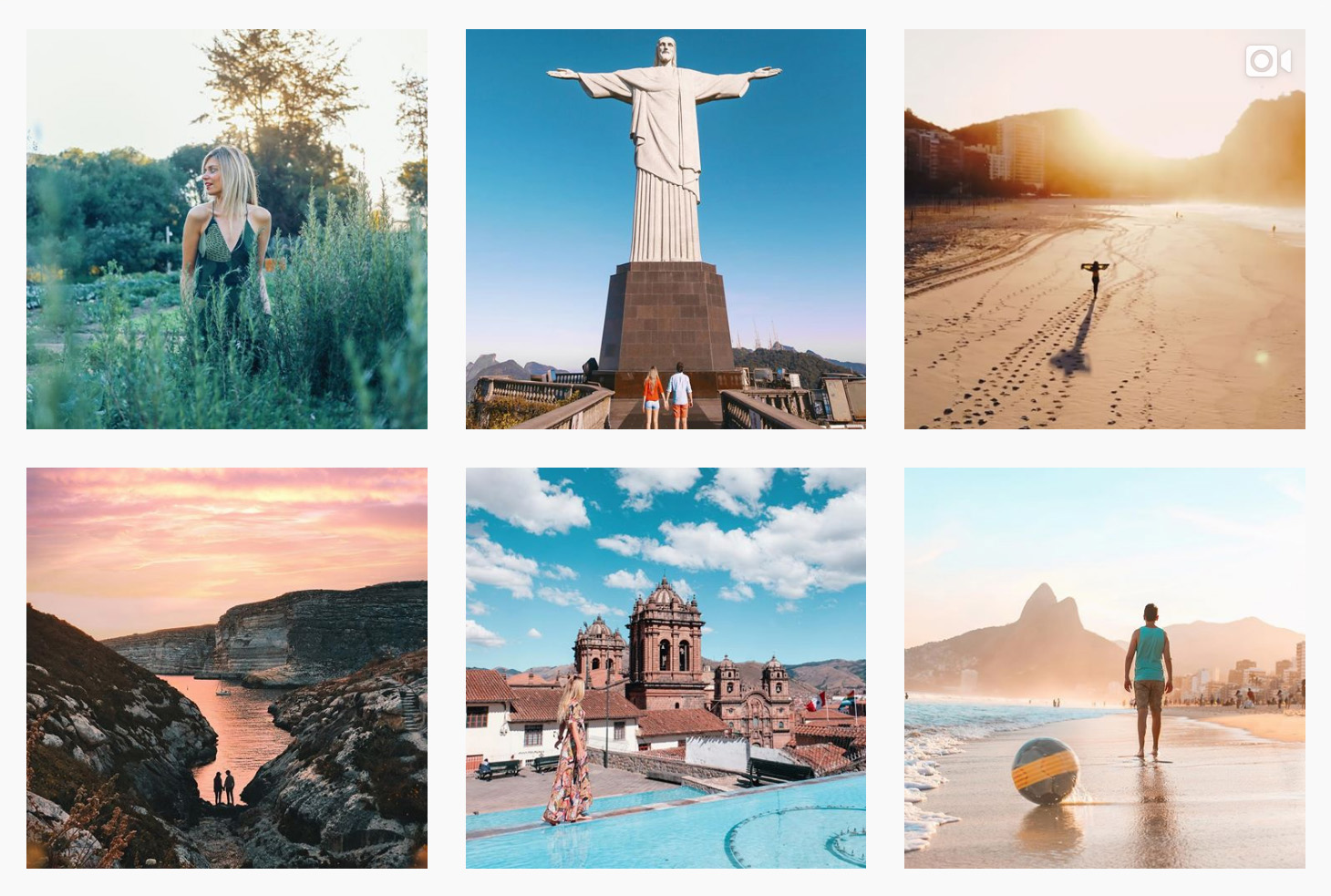 Their Instagram profile boasts 168,000 Followers and continues to grow every single day. They come with an impressive scorecard of 78.

Wondering where these scores are coming from? Influencer scores are based on relative performance metrics in key areas such as: the sum of interactions, interactions per 1,000 followers, number of followers, and overall posting frequency.

This Aussie is a self-professed foodie, traveler, and nutritionist. Rumble faced a constant struggle with weight and feeling during her life and was on the very verge of becoming a diabetic. This was Rumble’s wake-up call. After realizing how integral nutrition is to adopt a healthy lifestyle, she began implementing big changes in her diet. What was once a shock to the system soon became a passion. Coming up with healthy food alternatives became a hobby that transpired into a career. 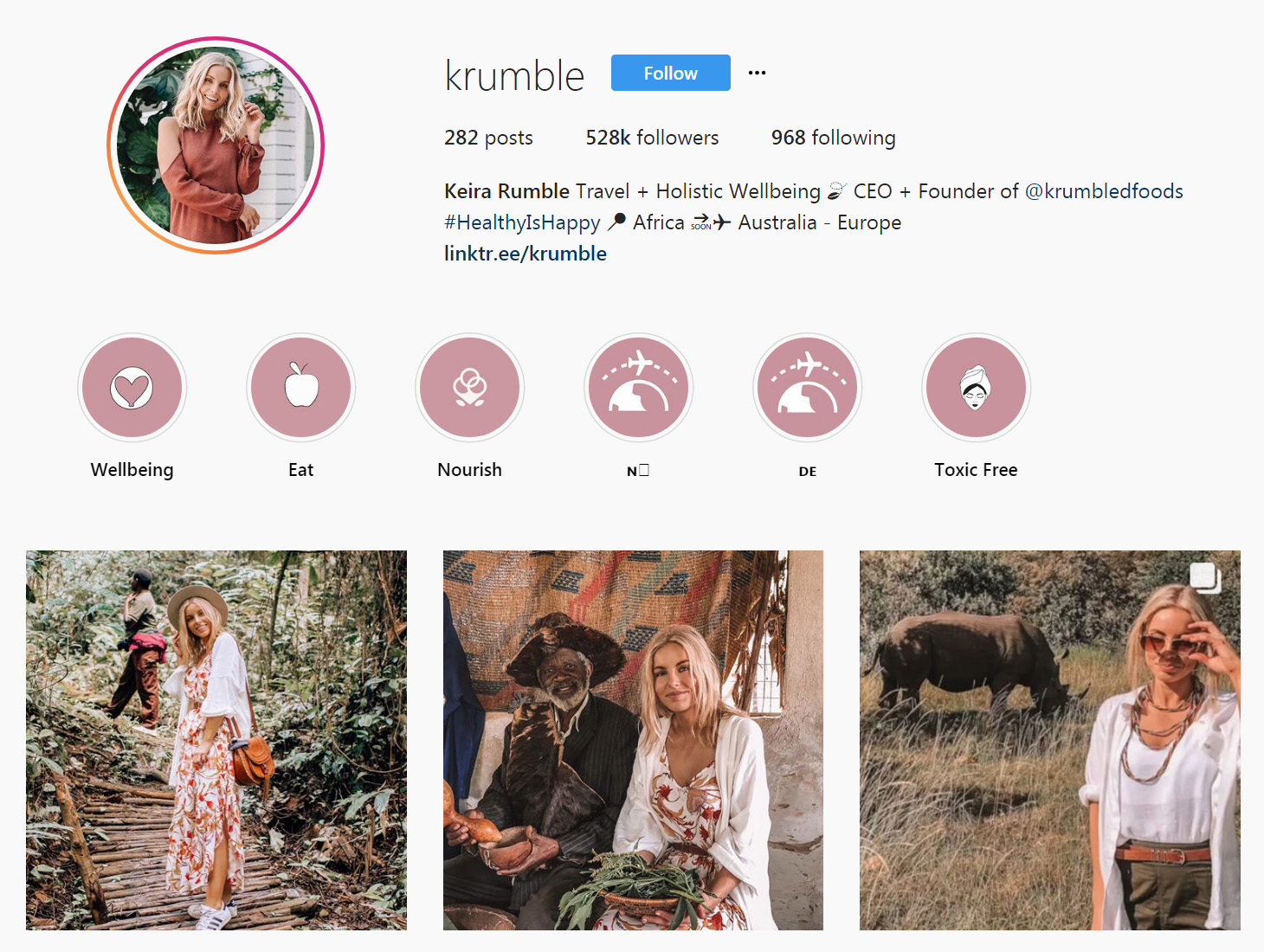 Today Rumble has her own website, Krumbled, where she shares everything from recipes to updates on her most recent travels. She even has her own eshop featuring snacks made with wholesome and natural ingredients. 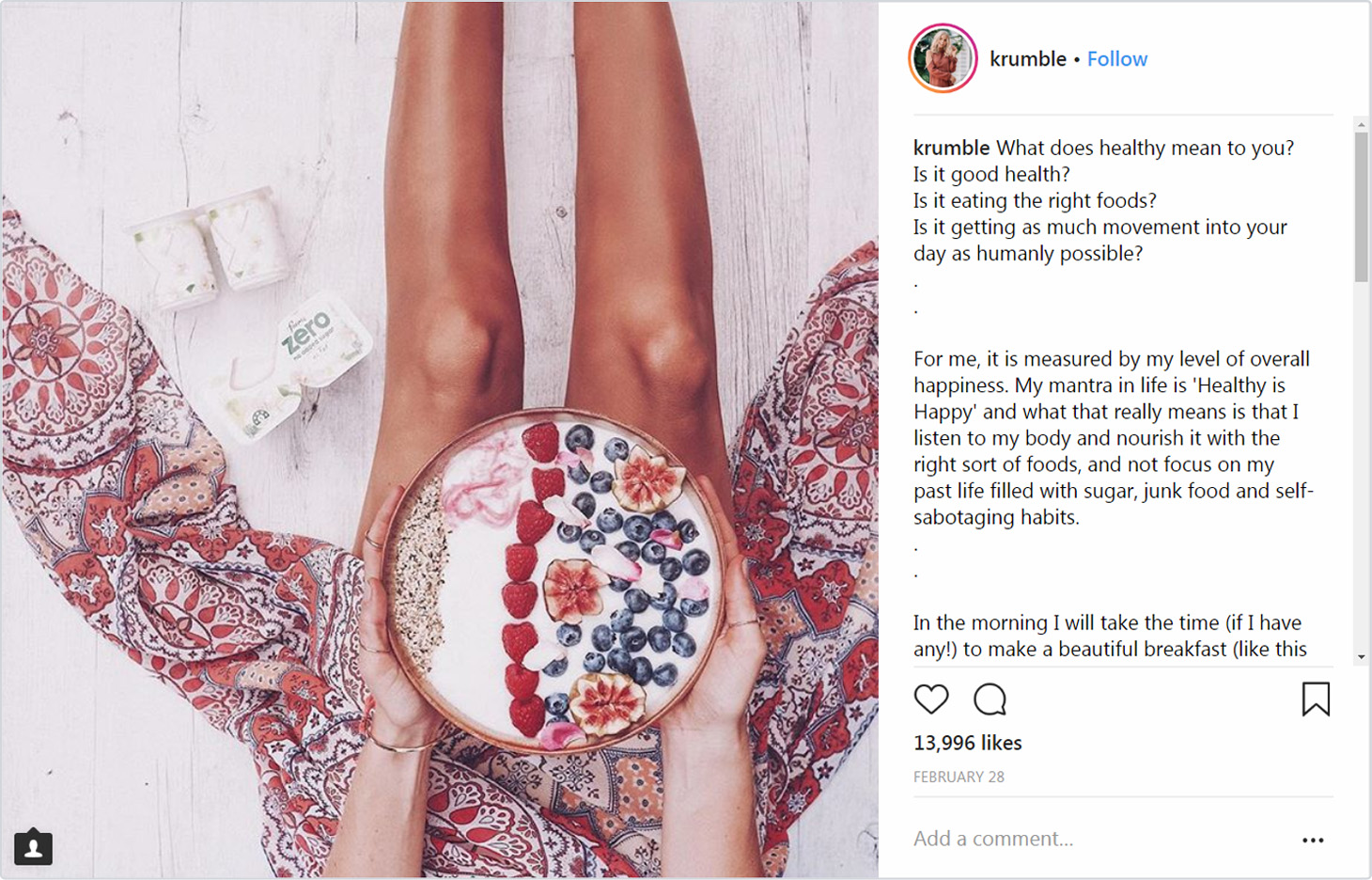 When it comes to her Instagram account, Kiera clearly knows what she’s doing. She brings her thirst for life and interest in cooking straight to her 500,000+ Instagram followers. This is exactly why she takes home a golden influencer score of 77.

Murad Osmann and his wife Nataly have become big names in the travel influencer industry. It’s crazy to believe that their fame sprouted from a single photo that has since become a viral sensation.

Their famous photo series took off in 2011 after Osmann captured a photo of his then-girlfriend pulling him toward a graffiti-covered wall. The image was so coincidentally successful that it inspired the #followmeto project which continues to be a huge hit. 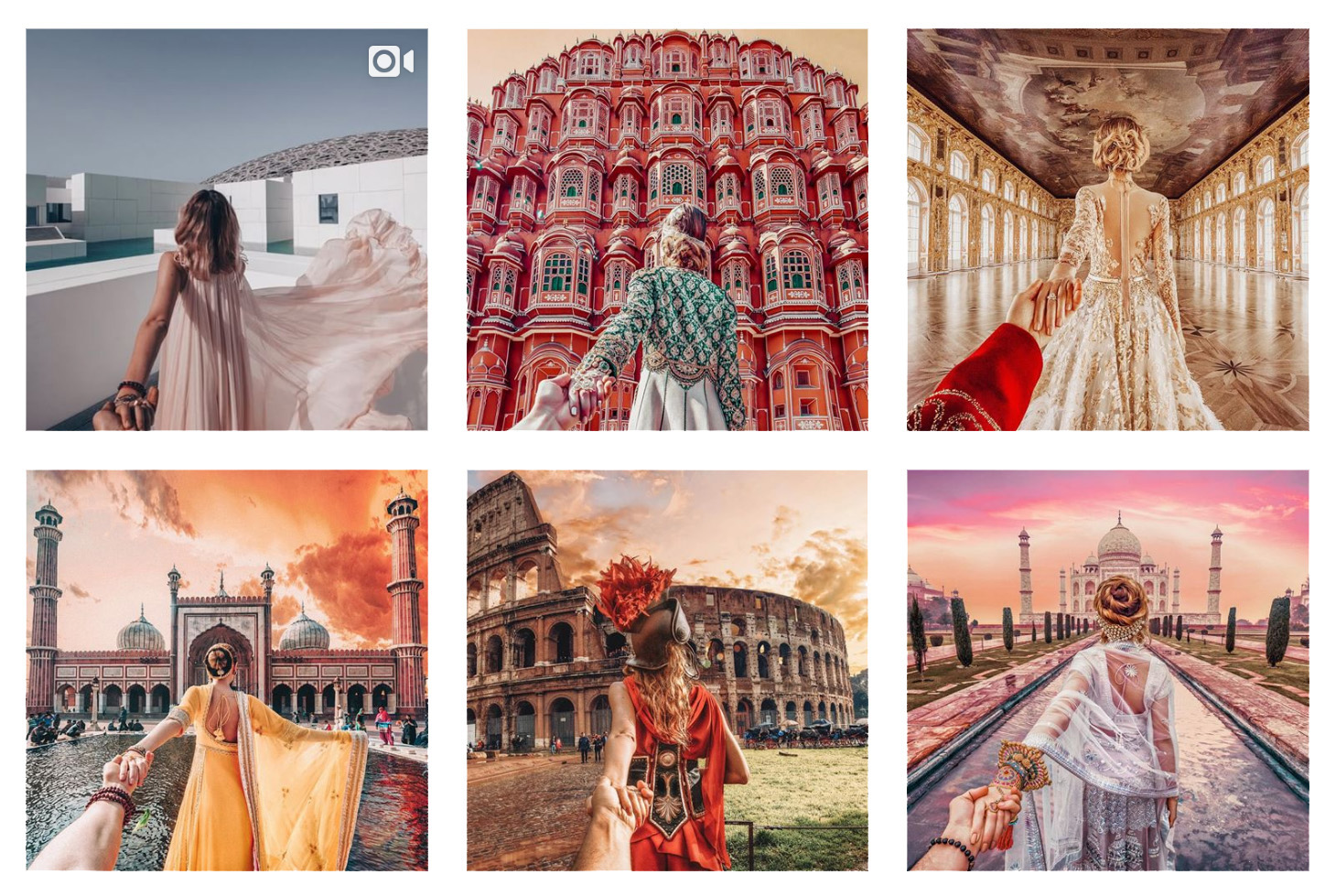 The duo’s images have since evolved, using their double talents to showcase picturesque backdrops across the globe. The hashtag alone now accompanies more than 1 million posts (and counting) across Instagram. 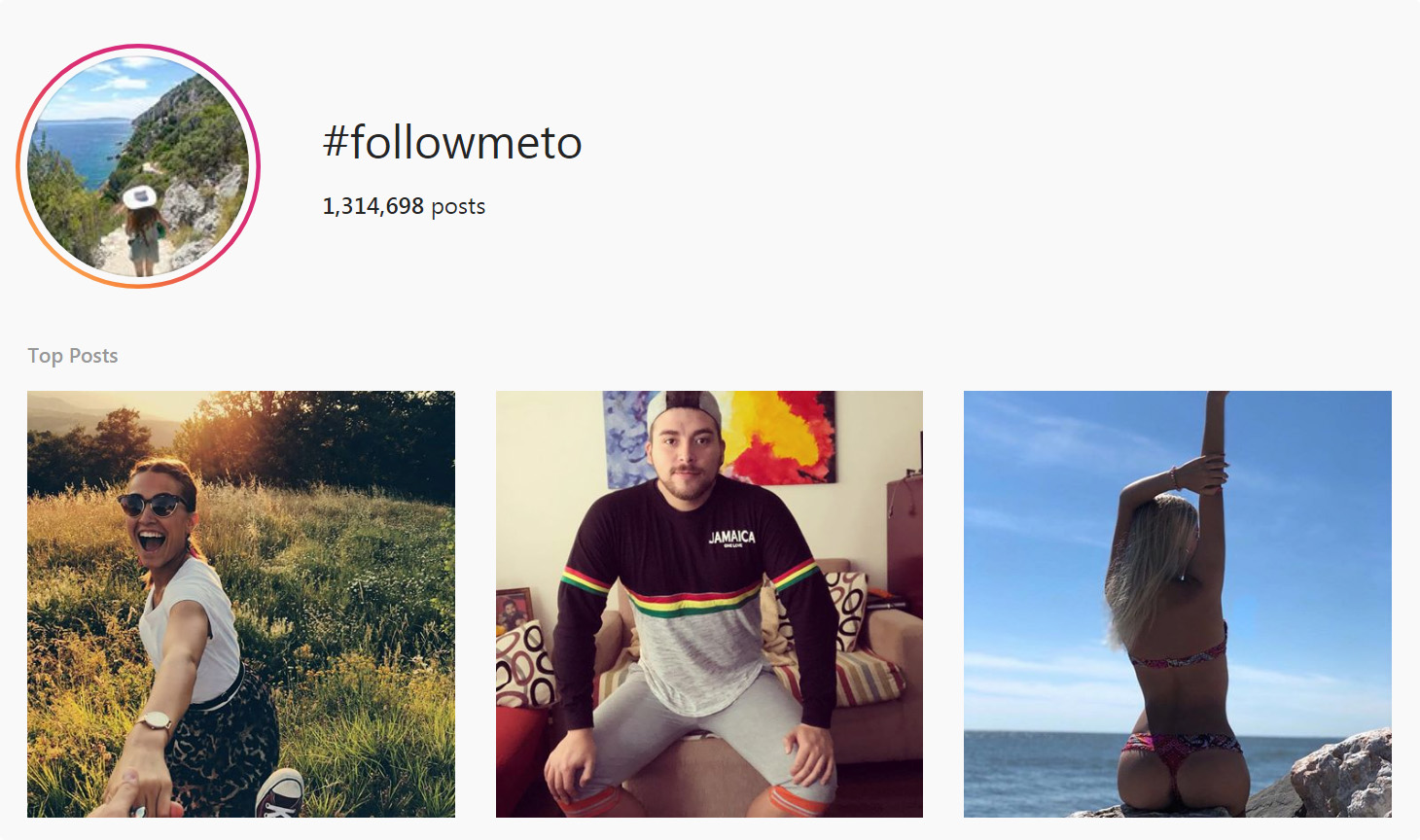 Fast forward to today and Murad’s Instagram account has grown to more than 4.5 million followers. But as we already know, having a large group of followers is only part of the story, activity is much more important.

We are happy to report that Osmund’s profile earned a whopping 76. 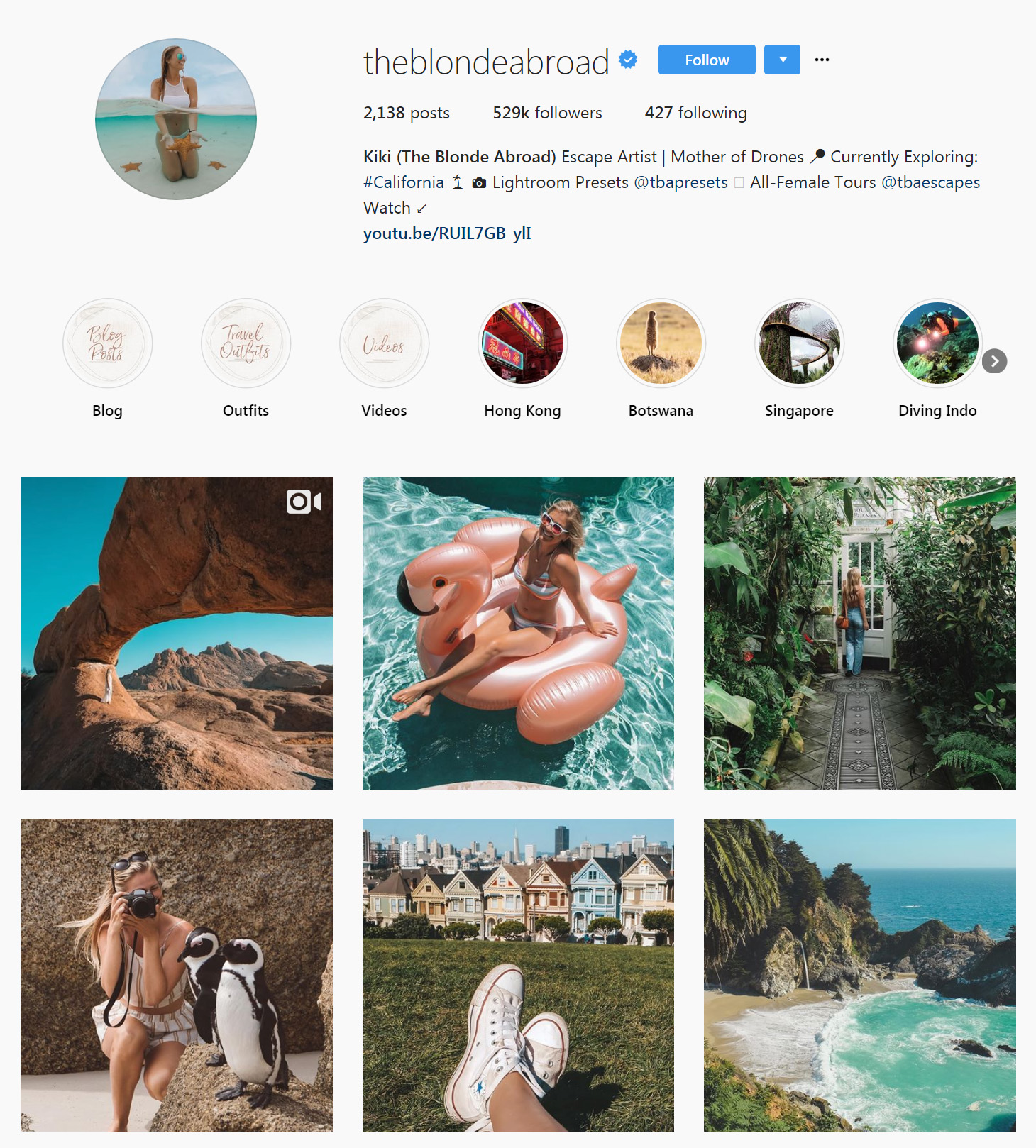 The Blonde Abroad has come a long way since its start, transforming into a profitable multi-level business with various revenue streams. Rich is able to fund her travels by attending press trips and partnering up with brands. She also offers tours designed to give her attendees a photo-centric experience of the South African safari. In fact, her most recent photo event is sponsored by Fujifilm USA - talk about a match made in heaven.

The Blonde Abroad account on Instagram boasts more than 500,000 followers. With a healthy amount of interactions per 1,000 followers and a consistent stream of content flowing in, Rich earns an influencer score of 75.

As a proud mommy and travel blogger from down under, Stein kicked off her success with her travel blog tuulavintage. She not only has traveled the globe - but has done it all while rocking vintage and designer clothes in her breathtaking posts. Fashonista.com even named her one of the most influential personal style bloggers back in 2013.

After Stein became a mother in April of 2017, her life has changed drastically. Her beautiful baby girl was diagnosed with Mosaic Trisomy 3, an extremely rare chromosome disorder. Consequently, Stein and her family have seen more hospital rooms than exotic locations. Today Stein is an inspiration to all mothers and uses her platform to discuss motherhood, her daughter, as well as raises awareness of chromosome disorders. 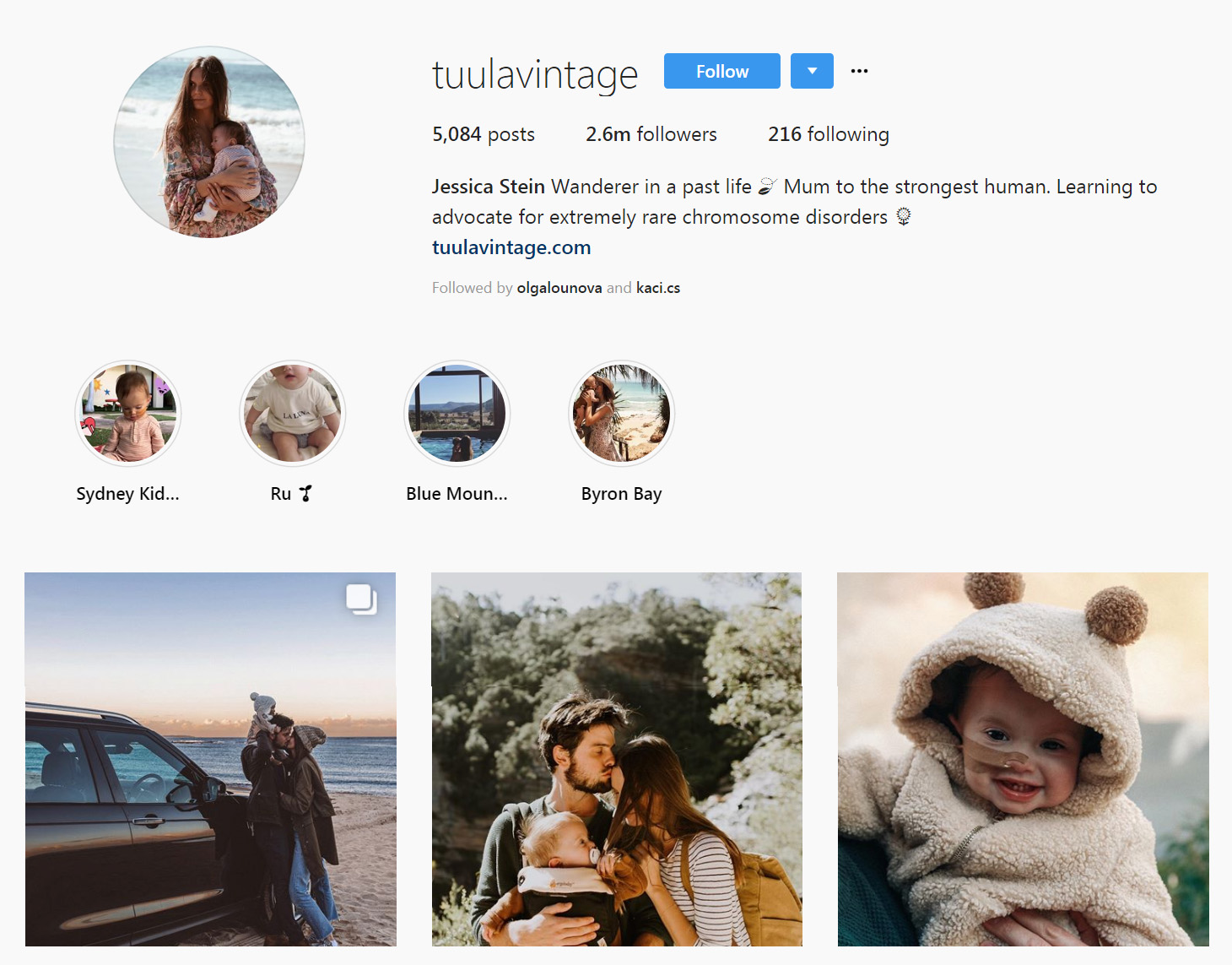 Stein’s Instagram followers have been there with her every step of her journey - from her travel days to the birth of her first child. Through her openness and caring personality, she has built a dependable community of fellow mothers as well as explorers- which is exactly why she has a proud influencer score of 75. Though Stein may not be crossing borders as frequently as she used to, she is having the time of her life exploring her own neck of the woods with her family. 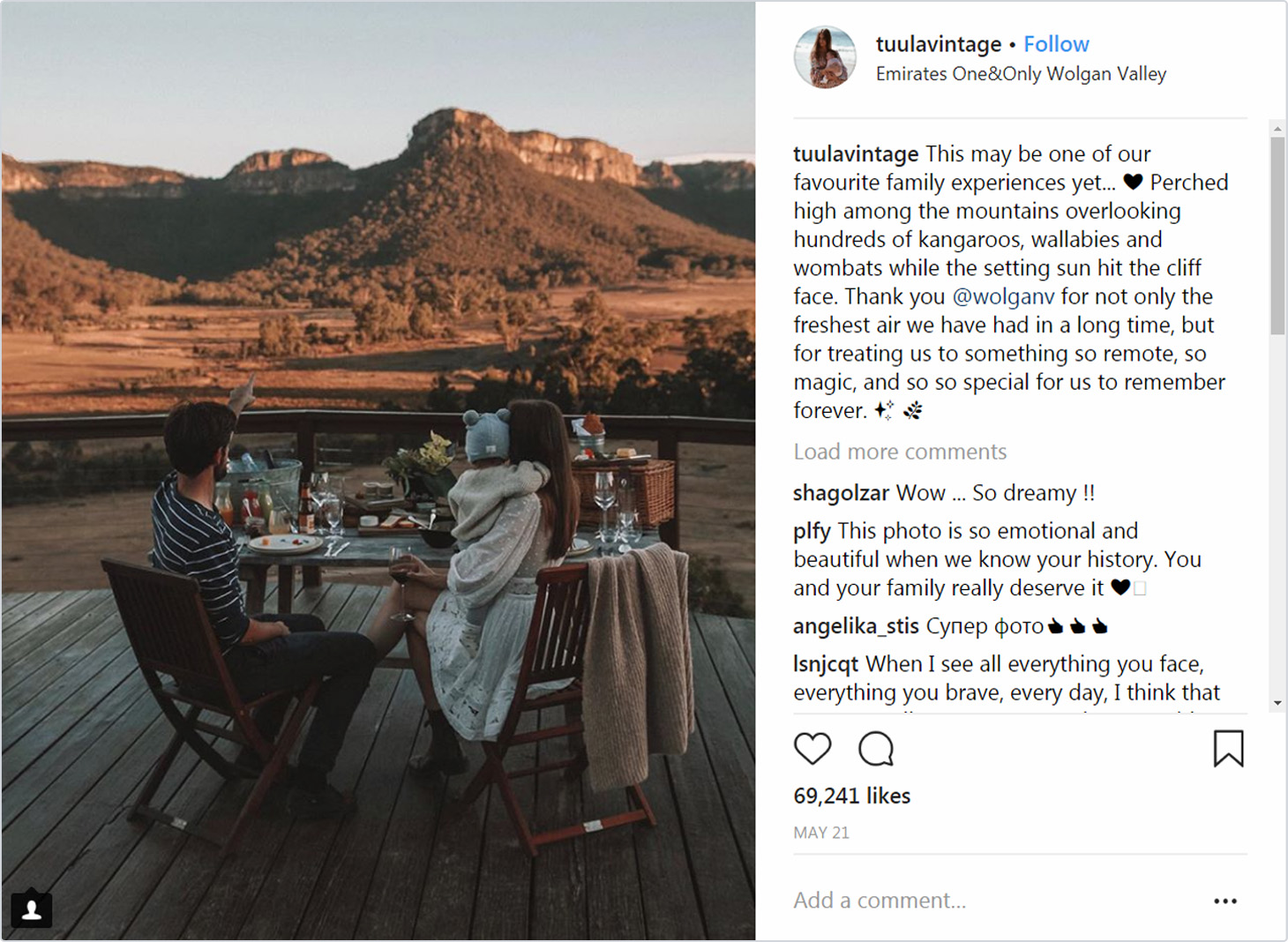 You won’t be seeing any Mai tai sipping and beach lounging on Cole’s Instagram account funforlouis. This adrenaline driven influencer is willing to go anywhere and try anything, which makes for amazing photo opportunities. His Insta photo grid proves that a picture can, in fact, be worth a thousand words (or even more in this case). 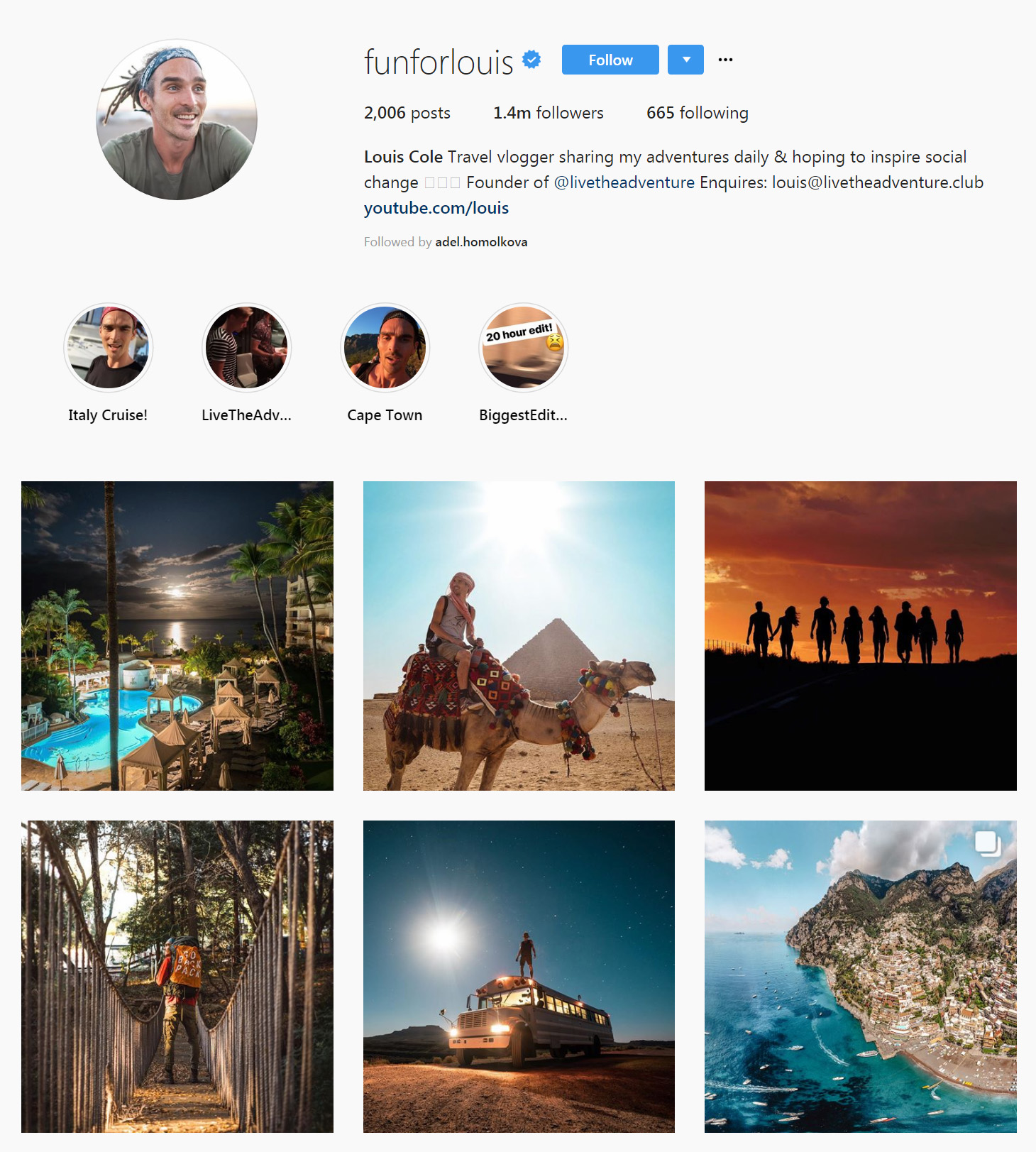 Originally from England, Cole got his big break by posting videos of eating stunts (we’re talking scorpions and goldfish here) on his channel called FoodForLoius. He expanded the breadth of his content and began covering different travel-related topics. His YouTube channel FunforLouis has grown to more than 1.2 million subscribers. 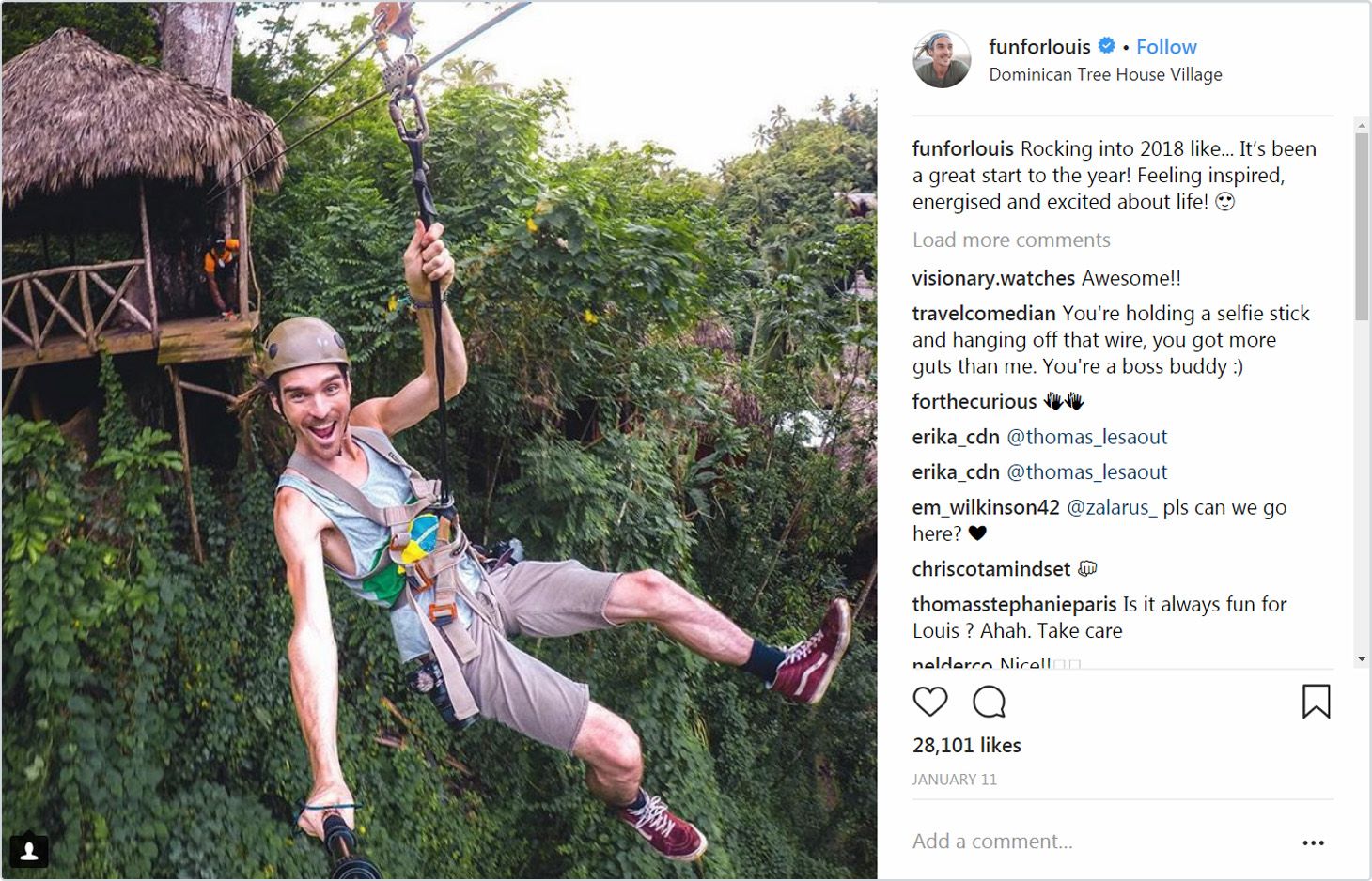 While the majority of influencers feature themselves on their Instagram account, chrisburkard takes an entirely different approach. The travel influencer and self-taught photographer prefers to be the one behind the camera rather than in front of it. His images usually feature landscapes and are so mind-blowingly beautiful that they appear unreal. 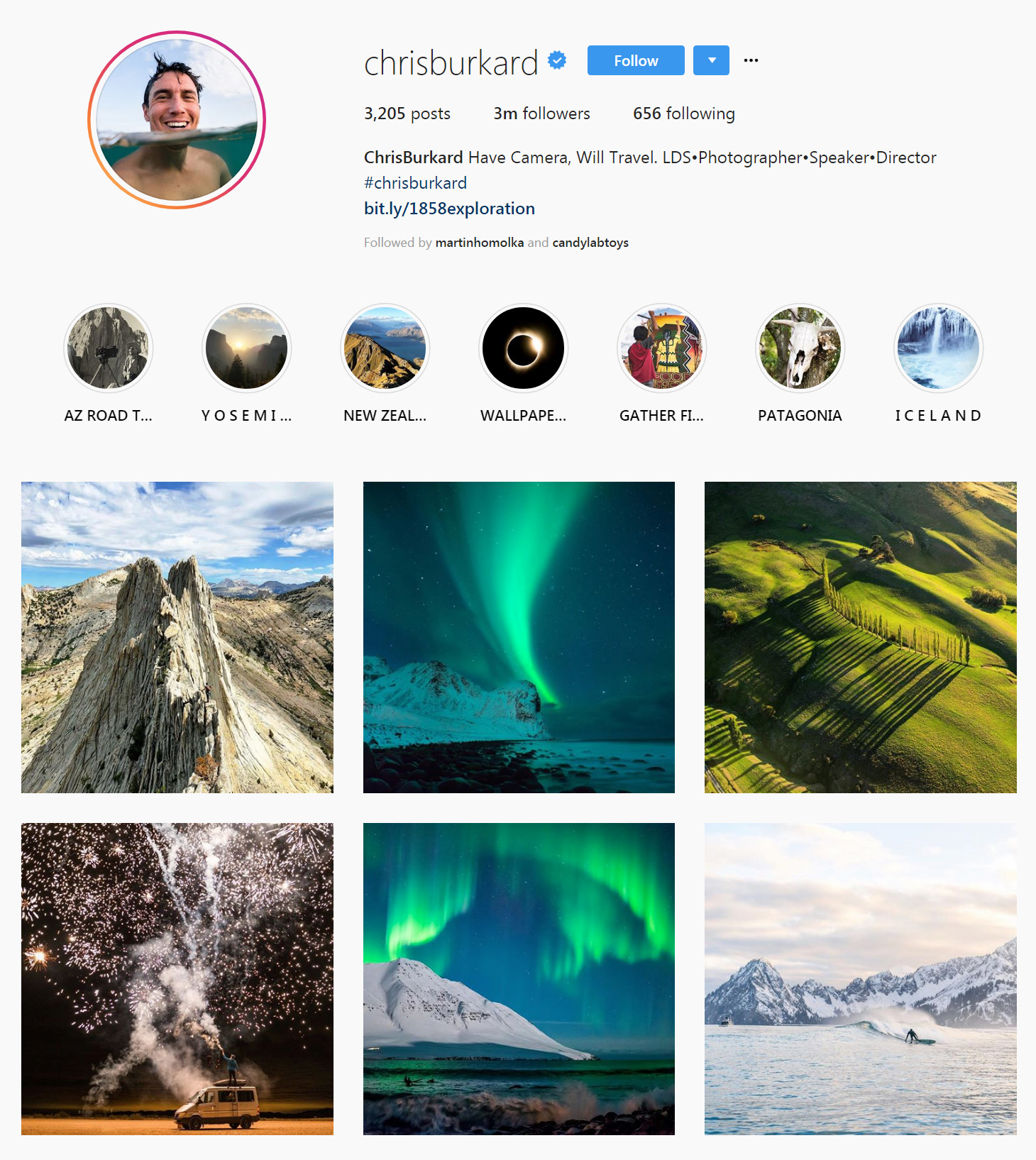 Born and raised in California, Bukard started his career as a freelance photographer working for an impressive list of brand names such as American Airlines, Volcom, Apple Inc. and more. Throughout his career, Bukard worked for several magazines until he landed his current position as a senior staff photographer at Surfer Magazine. 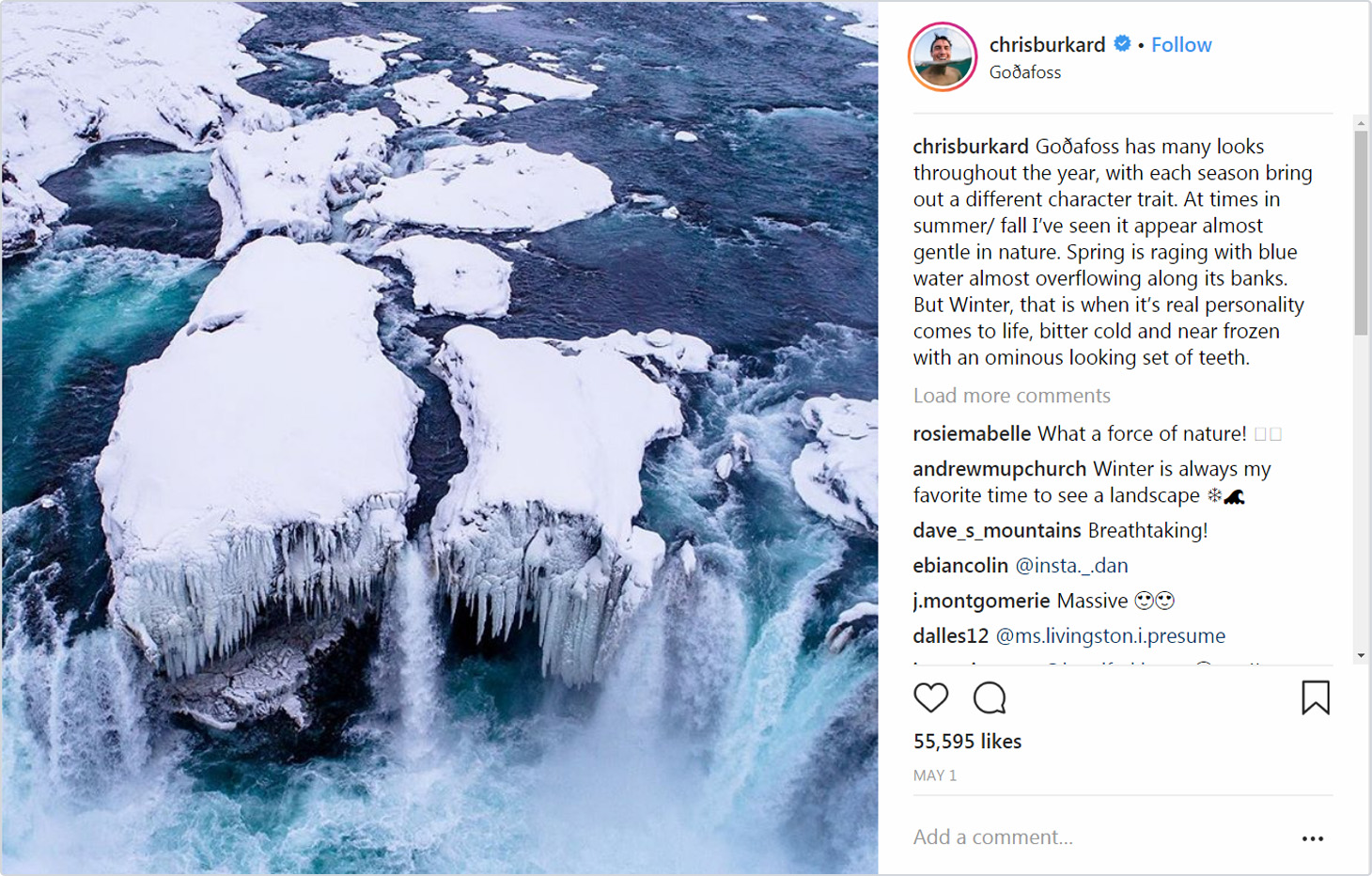 Burkard has earned his place in the Instagram travel influencer hall of fame. Throughout his career, he has been awarded for his work and is sponsored by some of the largest brands. His photojournalist approach and eye for detail have captured the attention of audiences around the globe, which is how he has grown his Instagram following to more than 3 million and achieved an influencer score of 72.

Wondering where these scores are coming from? Influencer scores are based on relative performance metrics in key areas such as: the sum of interactions, interactions per 1,000 followers, number of followers, and overall posting frequency.

Jennifer, also know as izkiz, is a British content creator, writer, and Instagrammer. She grew up just outside Amsterdam and now divides her time between the UK, Netherlands, and the coast of Turkey. Her international upbringing has contributed to her #wanderlust attitude which has made for some pretty stunning Instagram posts. 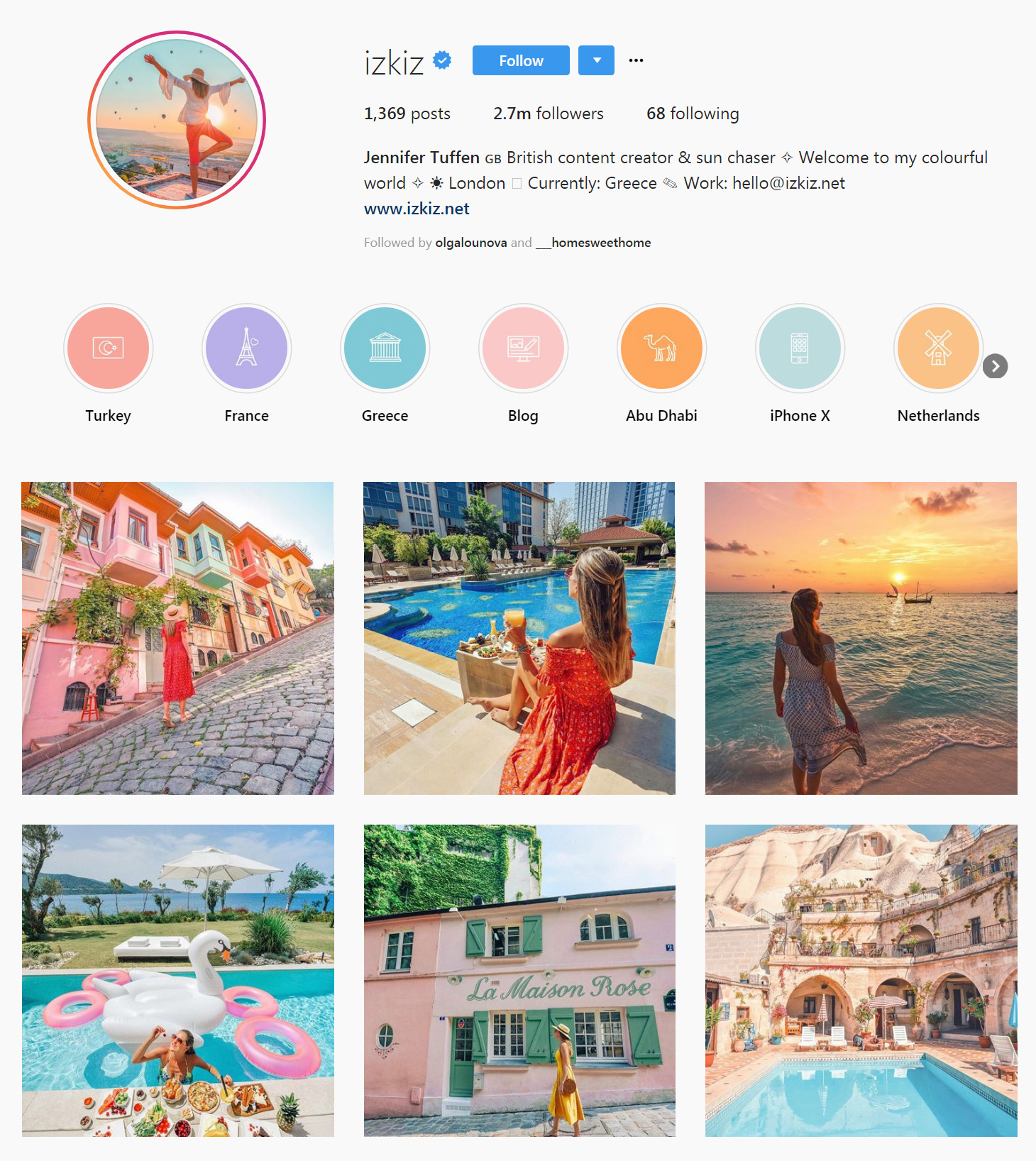 Tuffen uses her blog and Instagram presence to post pictures of luxurious destinations, review resorts, and bring her community members closer to the products she loves- from Essie nail polish to L’occitane rose hand cream. The look and feel of her Instagram account are extremely vibrant and color-rich which gives her a competitive edge over other travel influencers. She also has her own photo editing app called ‘izkiz Cam’ to help her fans create their own jaw-dropping photos of their travels. 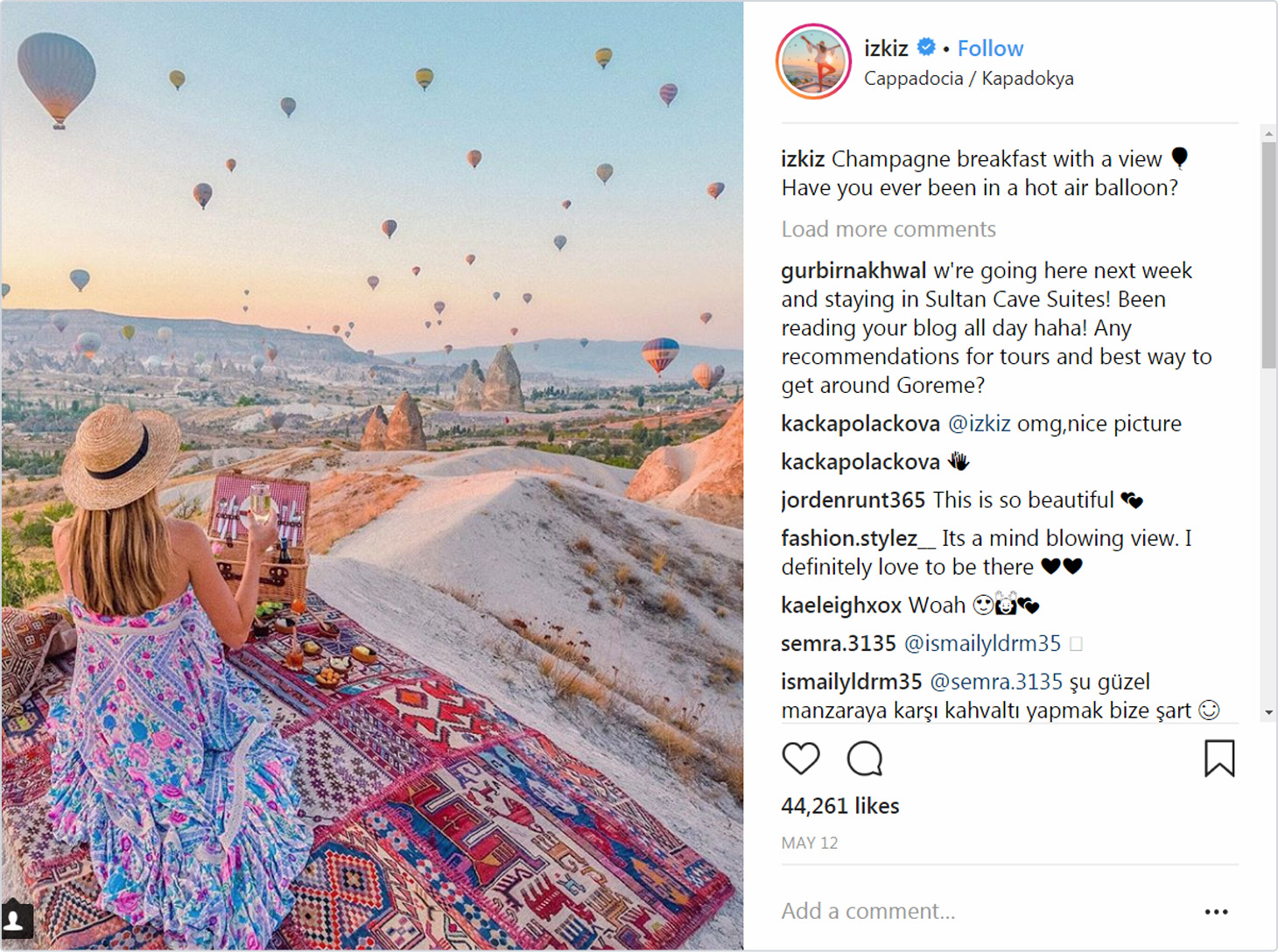 Over the past 6 years, Tuffen has made amazing strides becoming on of the biggest Travel Instagram influencer with an audience of more than 2.7 million followers! To consistently bring relevant content to her audience she regularly cooperates with brands to promote tourism campaigns, sponsored posts, events and more. Her high-spirited personality and animated Instagram profile have earned her an influencer score of 69.

Influencer marketing is taking the social media world by storm and it doesn’t take a mathematician to find out why.

Influencers have created a social media presence built on trust. They’ve shared some of the most personal aspects of their lives with their audience and know exactly how to create content that appeals to them.

Though brands know that influencer marketing is a powerful tool, they still have many questions about where to find influencers, how to measure results, and so on. You can narrow-in on influencers that are right for your brand and industry. Or, you can make your search more granular by defining the influencer audience size or region.

Find the right influencer for your brand today by signing up for a free trial.