World Cup 2022: A recap with our top social media findings

What. A. Finish — to what may go down as one of the most dramatic World Cup finals ever.

FIFA World Cup Qatar 2022™ is over, and while we all know who won on the pitch – ¡Felicidades, Argentina! — it’s time to look at who and what dominated the social media conversation during the tournament. At Emplifi, we’ve spent the past few weeks with one eye on the match and another on social media. We’ve been looking at how fans engaged with their teams on Twitter, Instagram, and Facebook — from the cheers and celebrations of victory to the sadness and disappointment of defeat.

We tracked the various social channels and watched how the days played out for each country involved in the tournament, observing wild mood swings and excitement building as some surprise teams made a surprise run toward the finals. From all that data, here are some of the top findings that stood out the most to us – along with the posts that went "World Cup viral."

The thrilling final, as relived through social media.

With Argentina and France squaring up, the match was nothing short of a suspenseful seesaw battle between two football powerhouses, each striving for their third World Cup.

The first half was dominated by the Argentinian side, highlighted by a successful Lionel Messi penalty kick during the 23' minute, followed by a goal by Ángel Di María at 36', both of which elicited huge reactions from their fan base on social as they headed to halftime with a 2-0 lead.

Argentina looked well on its way to victory for much of the second half. That is, until France stormed back to tie it up 2-2 after two Kylian Mbappé goals in only two minutes late in the second half. The final officially became a nail-biter.

The match headed into extra time, with fans worldwide sitting on pins and needles. With ten minutes to go in extra time, Messi lifted Argentina to a 3-2 lead. But cue more dramatics — France tied it up mere minutes later, sending an already-memorable Finals into penalty kicks.

This was a back-and-forth affair that even the most casual football fan won’t soon forget. It only gets us even more pumped for the 2026 World Cup hosted by Canada, Mexico, and the United States!

Fan sentiment: High expectations were reflected as the tournament rolled on

As with every World Cup, there are favorites, sleeper picks, and those that may be playing their first World Cup ever (Qatar) or for the first time in a long time (Wales, Canada).

But with each of these scenarios comes a different set of expectations. For some, anything short of winning it all could be seen as a disappointment, while for others, making it to the big stage is sometimes already seen as a big win. And these expectations were very apparent when looking at how people responded to teams' official social media posts.

Let’s look at how fan sentiment evolved during three of the biggest stories of the World Cup.

Morocco's surprising surge to the semi-finals

Let’s start with one of the feel-good stories of the World Cup: Morocco’s march to the semi-finals.

Many pundits had Morocco not even making out of the group stage, especially with Belgium and 2018 runner-up Croatia in the same group. But alas, they not only finished 1st in the group but beat Spain and Portugal in the knockout stage before succumbing to France in the semi-finals.

And at each step of Morocco’s journey, positive sentiment was prevalent, even on the day of their semi-final loss to France and subsequent loss to Croatia to finish 4th in the tournament.

One of the biggest talking points that emerged throughout the World Cup is Portugal's deployment — or some would say a lack thereof — of Christiano Ronaldo. This reached a boiling point in Portugal's quarter-final loss against Morocco when Ronaldo was not included in the starting XI, and only came in as a substitution after halftime when Portugal was already down 1-0.

This chain of events caused an uproar on the Portugal team's social media channels, providing one of the few instances we noticed negative sentiment notably surpassing the positive.

Some losses didn't sting as much for certain teams

No one likes to lose. But sometimes, there’s a silver lining. Finishing the highest you ever have at a World Cup (Australia) is one example. Surpassing expectations after knocking off the #1 ranked team (Croatia)? Another good one.

Looking at Australia first — or the "Socceroos" as they are affectionately nicknamed — the team finished 11th in the tournament after bowing out to Argentina in the Round of 16. However, after finishing 30th in the 2018 World Cup, this represented a new high for the Socceroos, and perhaps as a result, the loss to Argentina on December 3 was not met with much negative sentiment. At least, not when compared to the overwhelmingly positive sentiment they received throughout the tournament.

At the same time, after being runners-up at the 2018 World Cup, few had Croatia pegged as a favorite to go as far in 2022. However, after advancing to the knockout stage, they won their next two matches — including a thrilling win over Brazil on December 9 — which seemed to damper most of the negative sentiment from their loss to Argentina in the following match on December 13. Croatia eventually finished 3rd in the tournament after defeating Morocco, proving many doubters wrong along the way.

The group stage is always a source of great storylines and suspense. Familiar foes collide, upsets stun football fans worldwide, Cinderella stories emerge, and, of course, the top powerhouses stoke the passion of their already-ardent fanbases.

And this World Cup group stage did not disappoint. 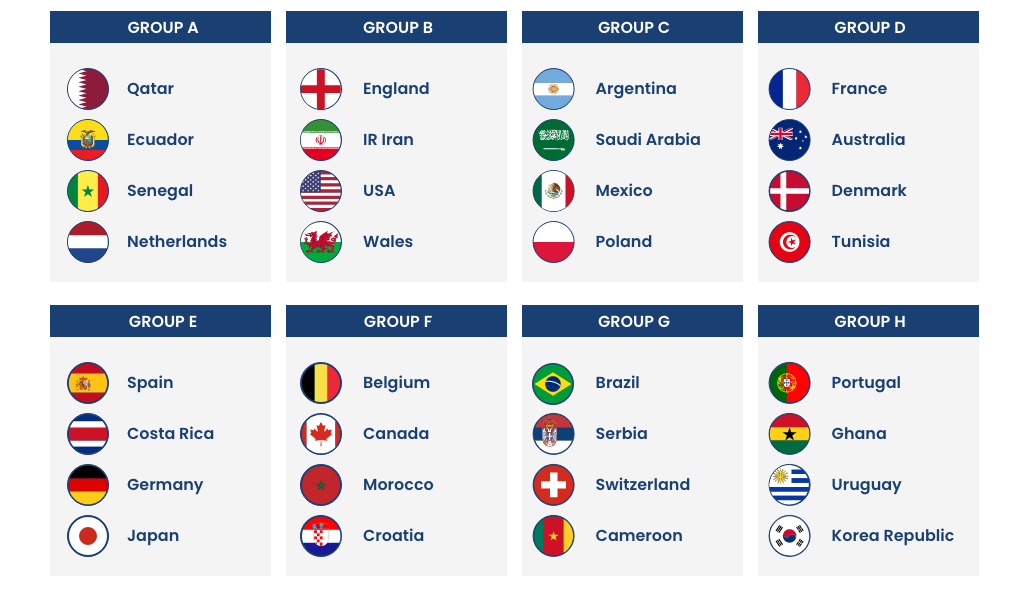 With these stories emerging throughout this stage, which groups — and teams — seemed to drive the most social media engagement? A couple of findings popped out to us.

Group C teams posted the most often, by far

Group C featured some intense matches and surprising results from the start, including Saudi Arabia's stunning win over Argentina 2-1, followed by Poland and Mexico's surprising 0-0 draw highlighted by a missed penalty kick from Robert Lewandowski. And Group C teams posted the most often to engage with their fans throughout the 13-day stage, with a notable gap with Groups B and E in this department: 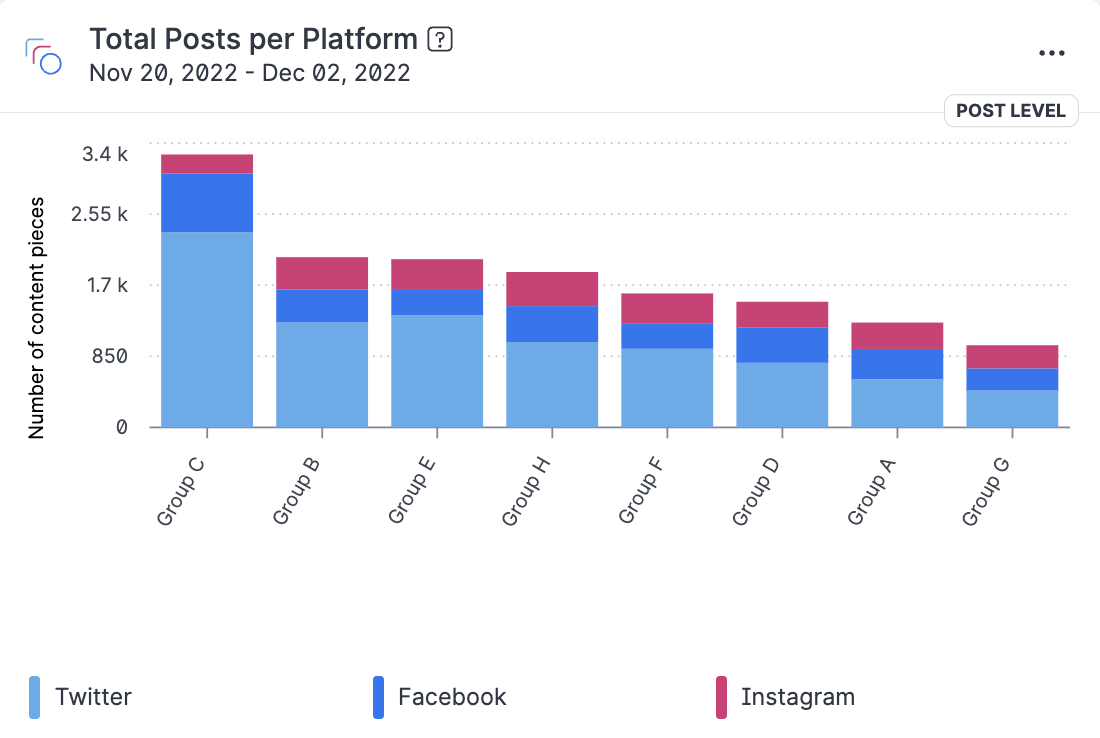 Due to the nature of Tweets and their enforced brevity, it’s not surprising that Twitter accounted for a significant portion of all posts during the group stage. It also accounted for over half of all posts for five of the eight groups.

Group H led the way in terms of total interactions

However, it was Group H that outpaced all other groups in this department (52.3M). With Instagram driving the large majority of total interactions among all groups teams during the group stage, the fact that Group H included a Portugal team featuring Christiano Ronaldo — the most followed person on Instagram — this result may not be a coincidence.

Group G came in third for total interactions (48.3M), largely driven by the powerhouse Brazil team that generated nearly 40M of these interactions — the most of any team during the Group Stage (more on that in the next section): 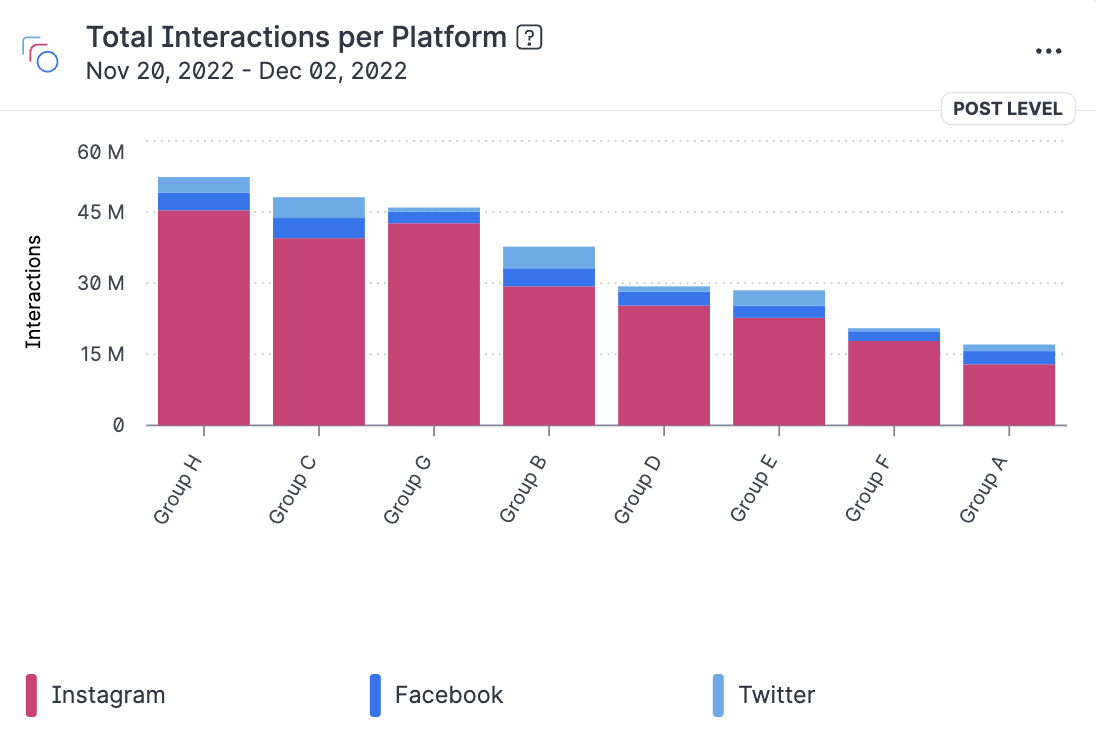 Just how engaged were teams' fanbases during the group stage? While individual groups reached tens of millions of interactions, teams like Brazil, Portugal, Argentina, France, and England outperformed even some of these groups with their social media posts.

For example, the Brazil team's social media posts alone saw more interactions than five other entire groups (Brazil figures are included in the "Group G" count in the chart above). At the same time, Argentina, France, and England outperformed Groups A and F in this regard.

While the countries above led the way in total interactions, perhaps no countries activated their followers the most with every post like Korea Republic, Serbia, and Ecuador, who saw the most interactions on their posts per 1K followers on their social media accounts.

Korea Republic, in particular, was able to garner a lot of reactions via its Instagram account. Which of Korea Republic's posts during the group stage saw the highest number of interactions per 1K followers? A carousel that featured the team with Jungkook (from K-pop sensation BTS) before a match against Uruguay (1.3k interactions per 1K followers):

As examined in the previous section, while a significant proportion of teams' social media posts were on Twitter, a significant amount of interactions came from their Instagram posts. But what type of Instagram posts did teams most rely on to generate this level of engagement?

As we will see in the next section, many of the top posts throughout the tournament centered around key moments during the matches. For example, when celebrating a goal or a key victory — times when fans are likely to be most active on social media and sharing instant reactions to their teams' matches.

With teams steering away from actual match footage on their social media accounts, teams leaned on photos and carousels for these intense, in-match moments. Teams instead relied on Instagram Reels and video for everything in between, including behind-the-scenes footage of the team getting ready for a match or celebrating in the locker room.

The posts with the most interactions throughout the World Cup

A couple of notes before going further:

The one we posted at the beginning of this article. But really, was there any doubt? With over 2.7 million interactions in about 24 hours, this number should only keep climbing.

The France team thanks its fans after the loss (297K interactions)

Emplifi is neither a sponsor nor a partner for the FIFA World Cup Qatar 2022™. The findings presented in this article are based on publicly available data that were compiled and analyzed using the Emplifi platform, and are intended for educational purposes only. All data included in this article are current as of the time that it was posted. All product names and logos are trademarks or registered trademarks of their respective owners.