LGBTQ+ influencers use social media to advocate for LGBTQ+ rights and share personal stories to help others who are struggling with their identity and sexuality.

Every June, LGBTQ+ communities from around the world come together and celebrate the freedom to be themselves. After decades of overcoming prejudice and fighting for acceptance, Pride month is dedicated to paying homage to the Stonewall Uprising back in 1969, which was marked as the beginning of the gay rights movement worldwide.

There are so many causes that stem from Pride month alone and brands need to take part in these conversations. Creating an influencer marketing strategy and collaborating with iconic LGBTQ+ influencers can help you build a bridge between your brand and the LGBTQ+ community.

In no particular order, here are the top LGBTQ+ influencers of 2020:

One of the most unique influencers in the LGBTQ+ community. Chella Man is a Chinese-American YouTuber, deaf activist, model, and actor. Best known for translating popular songs into American Sign Language on YouTube and raising awareness for gender issues for LGBTQ+ youth and disabilities.

Throughout his journey, he has become one of the top picks to model for Calvin Klein’s  limit-edition Pride collection this year.

Aside from YouTube and modeling, his sole mission in his acting career is to shed light on the importance of disabled actors playing disabled characters for proper representation and to deconstruct stereotypes.

Winning “Changemaker of the Year” at the 2018 Cosmopolitan Awards, Munroe was the first transgender model in the UK and one of the most leading advocates for UN Women UK.

Munroe had her first spotlight with L'Oreal back in 2017, but then the company later dropped her for speaking out about racism and white supremacy. Today, in the midst of growing protests for Black Lives Matter worldwide, Munroe has called out L'Oreal for their hypocrisy.

Social media has given Munroe a powerful platform to raise awareness of how brands should address diversity and inclusion. Keep in mind that influencers can either turn followers against your brand or help promote your brand worldwide.

Loved by millions around the globe, Jonathan Van Ness is an American hairdresser, podcaster, and a television sensation.

Aside from being one of the hosts of the Emmy-winning Netflix series Queer Eye, Jonathan has been an advocate for health access and pro-LGBTQ+ policies, such as the Equality Act.

Jonathan’s Instagram presence has reached out to over 5 million followers worldwide. Based on Socialbakers’ AI content analysis, the above example is one of Jonathan’s top posts on Instagram and gained over 703k interactions.

Amber Whittington is an influential force on social media. With a following of over 600k subscribers on YouTube, Amber’s Closet uses comedy skits, motivation videos, fashion, and LGBTQ+ topics to connect with her audience and breakdown stereotypes.

Last summer, Amber and Jordin Sparks collaborated with Wells Fargo to host a YouTube short series called Empowerful Exchange. The series uncovers the stories and challenges of influential entrepreneurs from all backgrounds.

In 2017, Lena Waithe became the first black woman to win a Primetime Emmy Award for Outstanding Writing for a Comedy Series, and that was just the beginning for her.

For the past three years, her presence in films, behind the cameras, and on social media has earned the love from millions across the US. Lena is also the leading advocate for LGBTQ+ rights, the #MeToo movement, and The Trevor Project.

In 2020, Lena is collaborating with Dove to create an Instagram series, Girls Room, that explores the challenges young people face every day, such as self-esteem and body confidence.

As the first German transgender model to be on the cover of Men’s Health magazine, Benjamin Mezler has challenged gender boundaries in the industry worldwide.

His personal stories of his transition from female to male have connected with hundreds of thousands who are struggling with their sexuality – becoming a strong voice for the trans community in Germany and worldwide.

Keiynan Lonsdale is one of the most iconic Australian actors and known for his role in the CW TV series The Flash. As a singer-songwriter, Keiynan released his first album, Rainbow Boy, in which he sings about a love letter to his queer, black community and to his younger self.

Aside from the acting and singing career, Keiynan is a model for Louis Vuitton’s Spring Collection campaign 2020. Fashion brands need to collaborate with influencers so they can extend their reach through social media.

After participating in the celebrity season of the Amazing Race, Tyler used IGTV to showcase his new workout tutorial series called “Get Fit With Tyler”, providing stay-at-home workouts for people stuck in quarantine.

Calle and Poché are a bisexual Columbian couple that is followed by over five million subscribers on YouTube. Their content is filled with dance, fashion, makeup, challenges, vlogs, and DIY videos. The couple’s most popular video, “Roast Yourself Challenge”, gained over 141 million views alone.

Winning LGBT British Award for LGBT+ Online Influencer last year, Calle and Poché believe that it’s important to have LGBTQ+ representation in the media and they’re actively vocal about protection for LGBTQ+ creators from unfair censorship.

Meet one of the most lovable couples in the LGBTQ+ community on social media. This charming couple from the UK has shared their most favorite travel memories from over 50 countries worldwide.

One of their social media strategies is taking advantage of the power of hashtags. Based on Socialbakers content analysis, Doug and Sanjay have used #gaycouple and #husbands about 400 times on their Instagram. Using multiple hashtags in an Instagram post is one strategy, but using the right hashtags can get you the right following for your brand. 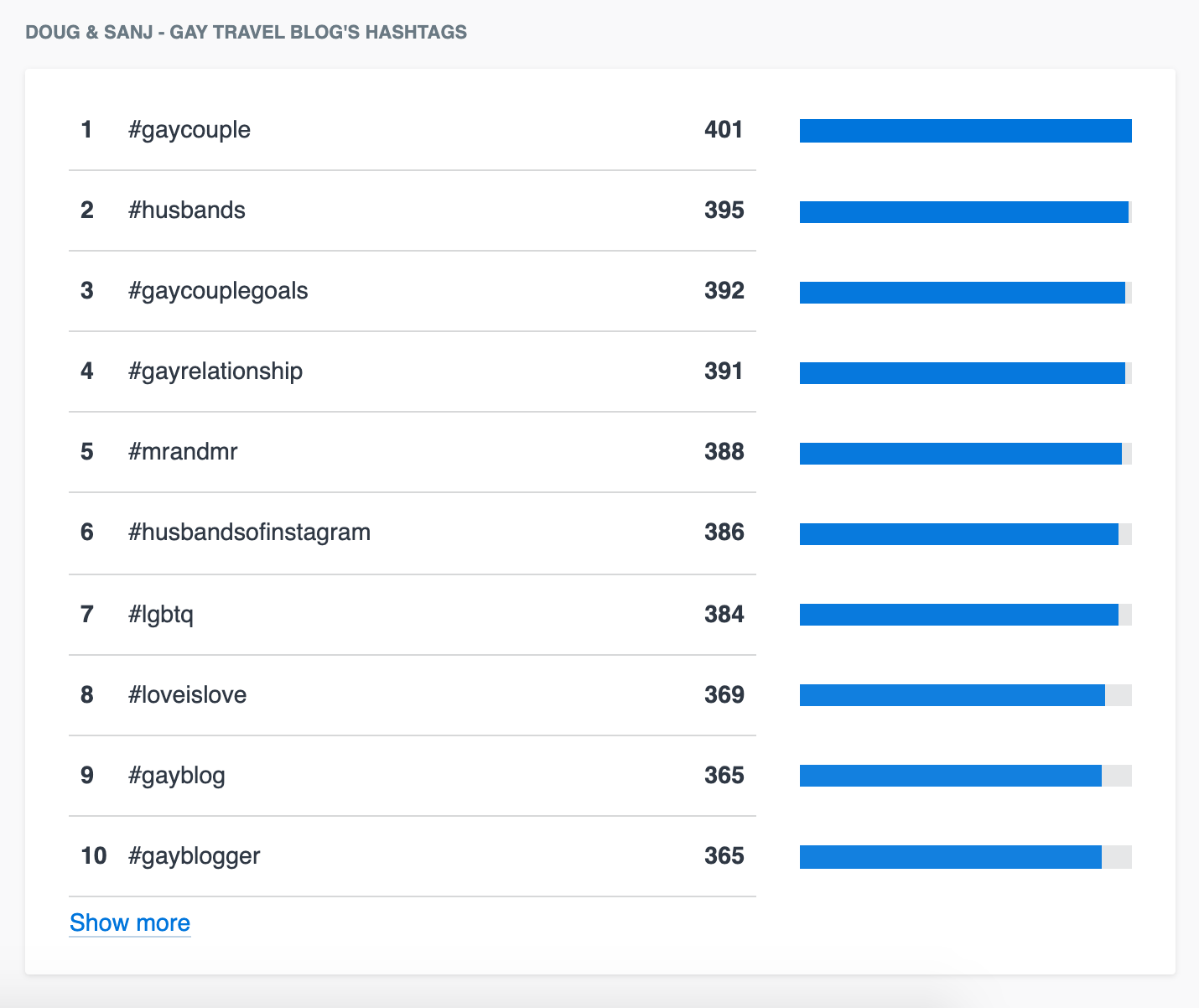 When it comes to influencer marketing, brands need to connect and build a professional relationship with influencers. LGBTQ+ influencers have devoted their time and energy to support causes they truly care about, especially during Pride month. And brands have to share that same value.

With Emplifi's Influencer Marketing Platform, you can access a huge database of influencers to find the right influencer for your social media campaign. Save time from long hours of influencer research and let Socialbakers’ AI do the work for you.