We found out that although the United States is the most populous Facebook country with the greatest number of registered Facebook Pages, higher activity on those Pages can be found in other countries.

Our findings show that Pages in Brazil publish the most number of posts out of all Facebook countries. More than 800 Pages that we monitored kept their Facebook walls busy with almost 86 thousand posts per month! On average, this means 103 posts per Page, which is the fifth highest after Italy, Colombia, Russia and Egypt. Pages in Egypt publish 380 posts on average per Page per month; however, they have almost 6X fewer Pages registered than in Brazil and almost 8X less than in the United States.

Facebook Pages from Turkey are doing great in terms of posting activity. Turkey is the 7th biggest country on Facebook and its users seem to appreciate their local businesses social endeavors. With 758 Facebook Pages, Turkey has the highest Page-to-user ratio out of all Facebook countries.

When we look at Russia, this country shows the second biggest per capita posting activity on Facebook. With Russia being one of the few countries where Facebook isn't a major player in social media, the Page posting frequency implies great potential for further Facebook growth. 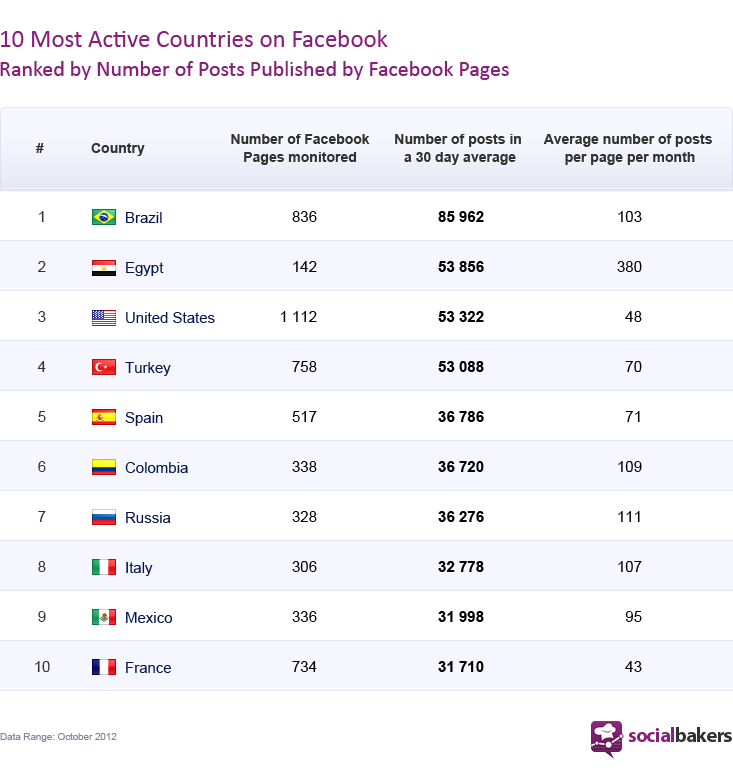