If you were supposed to guess which city in the world has the most Facebook users, which one would it be? Mexico city, New York, Tokyo or perhaps Las Vegas? According to Socialbakers statistics, if Facebook was a country, its capital city would be Bangkok! Thailand has over 14.6 million Facebook users which makes it the 16th biggest Facebook country in the world! It grew by more than 1.3 million users in the last 6 months, mainly thanks to people between 25 to 34 years old. The Facebook penetration in Thailand is 22.01% compared to the country's population and 83.60% in relation to the number of Internet users. 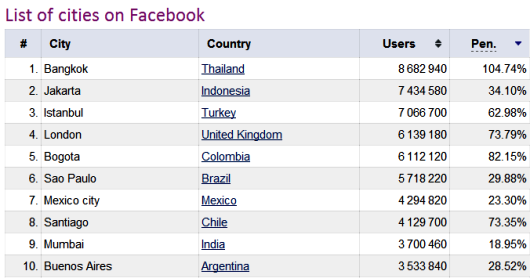 But if you are expanding your business to Thailand, don´t get inspired by KFC´s Facebook strategy! While millions of people evacuated the coastline along the Indian Ocean due to tsunami warnings, KFC posted on its Facebook Page: "Let’s hurry home and follow the earthquake news. And don’t forget to order your favorite KFC menu.”

Jakarta and Mumbai are also dominating the ranking, which only support´s the idea of Asia becoming the next biggest Facebook continent after North America if it continues to expand. While India is continuing in its growing trend, Indonesia has lost just a bit over half a million Facebook users in the last three months.

London getting ready for the Summer Games 2012

Europe is doing great mainly with Istanbul and London. That´s wonderful news for the UK, which is getting ready for the Summer Games 2012 coming up soon. They have already been labeled as "Social media games” thanks to the sponsors and many other brands launching interesting online and offline campaigns, Facebook applications, Twitter hashtags, YouTube videos etc.

For example confectionary company Cadbury came up with a virtual march for their fans to support their heroes via a Facebook app. They could create their own avatar with their face, invite friends to the march, share the experience by taking a snapshot of it and posting it to the wall and win tickets to the Summer Games 2012.

And of course, who would miss the Facebook growth of cities in South America? Bogota in Colombia, Sao Paulo in Brazil, Santiago in Chile and Buenos Aires in Argentina have the most Facebook users at the moment. Sao Paulo even helped Brazil to become Facebook's second biggest country in May and it´s making its country proud by contributing to the nearly 8 million growth during the past three months!